USDCAD came to a stop at the 1.3068 support coming from the swing low of February 1, after breaching the uptrend line drawn from 2017’s low. Sellers have kept the price below the trendline and therefore further declines are on the table, something also backed by the downward slopes of the 20-, 50- and 100-day simple moving averages (SMAs). 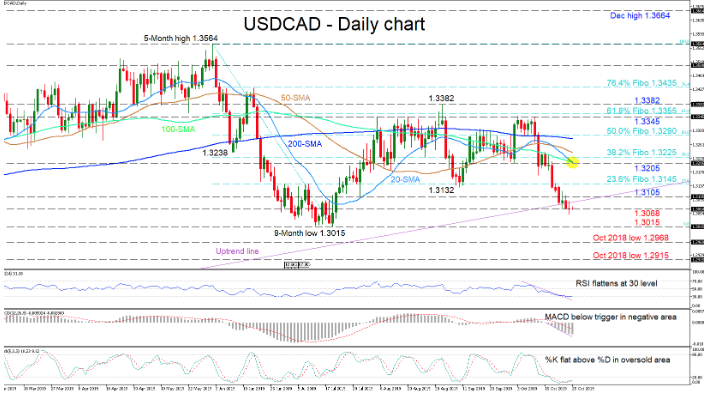 The short-term oscillators reflect some easing but remain bearish suggesting more losses could unravel. The MACD has smoothed slightly but is still some distance below its red trigger line in the negative zone. The RSI has turned flat at the 30 level, while in the stochastics – despite the bullish crossover in the oversold region – the %K has flattened above its red %D line. Moreover, backing the negative picture is the nearing bearish crossover of the 100-day SMA by the 20-day one.

Below the uptrend line, if the sellers manage to penetrate below the limiting support of 1.3068, the nine-month low of 1.3015 could challenge the bears. A violation of the 1.3015 trough could reflect a bearish shift in the medium-term bias with the October low of 1.2968 and 1.2915 respectively, testing this view.

Summarizing, the short-term bias remains bearish. However, a break below 1.3015 would reinforce the negative outlook, while a close above 1.3105 could return a neutral-to-bullish bias.

Oil Under the Gun Again. On Monday morning, a barrel of Brent is
Euro Completely Recovered Its February Losses. On Monday, March 2nd, the major currency pair
How long to the parity for EURUSD?. EURUSD price is continuing to decrease. The last
Correctional Rebound in Oil Died DownGPBUSD: chance of a drop is still thereGold Stopped GrowingBrent oil price to drop down to $50Pound Handled the Brexit with DignityUSDCAD rises to 7-week high above 1.3200
Quotes / Fri 07 / May / 03:20pm

Bitcoin and Gold Prices Diverge Again, Extending 5-Month Correlation. Bitcoin is again feeling the pull of gravity
Markets roll back after last week decline, EURUSD tests the important resistance. Market focus Holidays in the U. S. and
What is crypto-currency in simple words?.   Crypto-currency is electronic virtual or digital money.
How to make money OUT of crypto-currency?How to earn bitcoin?What is bitcoin in simple words?How to buy a bitcoin?
Economic calendar / Friday 07 / May / 06:20pm