USDCAD needs rally above 1.3100 for bulls to gain traction

USDCAD is retreating below the 50- period simple moving average (SMA) in the four-hour chart which nicely kept the bears under control on Thursday. 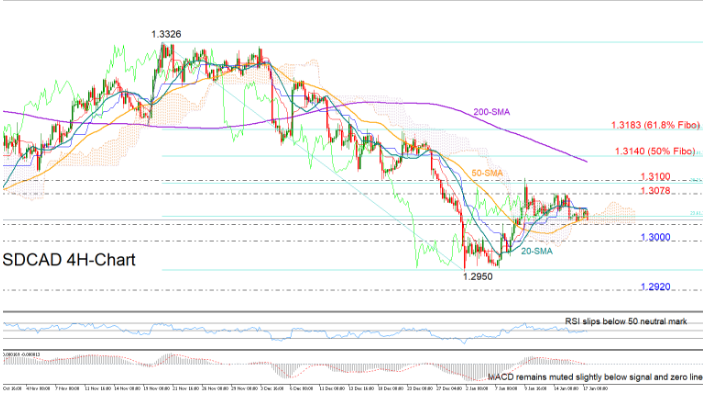 Technically the pair could perform neutral to negative in the short-term as the RSI is slipping below 50 and the MACD is fluctuating marginally below its zero and signal lines, whilst in Ichimoku indicators, the red Tenkan-sen line which is moving below the blue Kijun-sen line is another discouraging signal.

Below the Ichimoku cloud, the 1.3000 round-level could deter any further downside corrections. Should it fall apart, the bears could drive the pair towards the 1.2950 bottom, a break of which could initially bring the 1.2920 barrier into view and then the October 2018 trough of 1.2780.

On the upside, the 20-period SMA could act as immediate resistance ahead of the 1.3078 barrier. However, only a decisive close above 1.3100 could trigger a meaningful rally as such a move would mark another higher high in the recent rebound, raising confidence that the downtrend off 1.3326 has bottomed out and an uptrend is in progress. In this case the 200-period SMA and the 1.3140 level, which is the 50% Fibonacci of the 1.3326-1.2950 bearish wave, could take over. Higher, the 61.8% Fibonacci at 1.3183 could be the next target.

Summarizing, USDCAD is holding a neutral-to-bearish bias. For the pair to enter a bullish phase the price should successfully overcome the 1.3100 level.

Oil Under the Gun Again. On Monday morning, a barrel of Brent is
Euro Completely Recovered Its February Losses. On Monday, March 2nd, the major currency pair
How long to the parity for EURUSD?. EURUSD price is continuing to decrease. The last
Correctional Rebound in Oil Died DownGPBUSD: chance of a drop is still thereGold Stopped GrowingBrent oil price to drop down to $50Pound Handled the Brexit with DignityUSDCAD rises to 7-week high above 1.3200
Quotes / Sun 18 / April / 05:36pm

Bitcoin and Gold Prices Diverge Again, Extending 5-Month Correlation. Bitcoin is again feeling the pull of gravity
Markets roll back after last week decline, EURUSD tests the important resistance. Market focus Holidays in the U. S. and
What is crypto-currency in simple words?.   Crypto-currency is electronic virtual or digital money.
How to make money OUT of crypto-currency?How to earn bitcoin?What is bitcoin in simple words?How to buy a bitcoin?
Economic calendar / Sunday 18 / April / 08:36pm