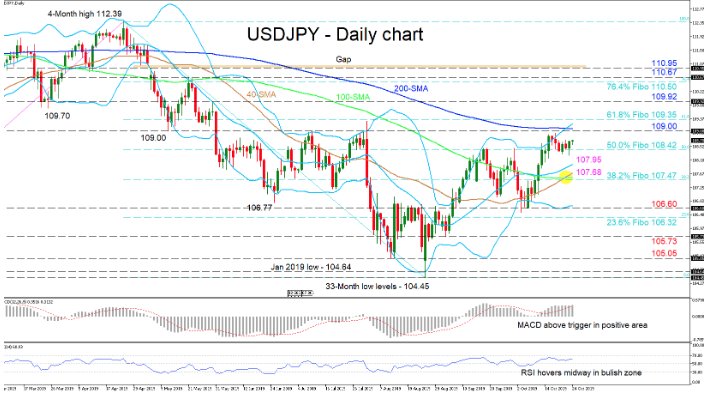 With the pause in the market, the MACD has eased, but remains slightly above its red trigger line in the positive region, while the RSI hovers midway in bullish territory – both promoting an improving picture. Moreover, the bullish crossover of the 100-day simple moving average (SMA) by the 50-day one and the upward slopes in the mid Bollinger band and 50-day SMA boost the positive view.

Alternatively, if sellers breach the 108.42 support, the drop could be interrupted by the mid Bollinger band at 107.95. Next, a more challenging area from 107.68 to 107.47 – the former being the 50-day SMA and the latter the 38.2% Fibo, which also contains the 100-day SMA – could apply significant upside pressure. Surpassing this, the lower Bollinger band around 106.60 could be next to test the bears.

Summarizing, the short-term bias is neutral-to-bullish. A break above 109.35 would cement the bullish bias in the short- and medium-term, while a break below 106.32 could revive the negative sentiment.

Oil Under the Gun Again. On Monday morning, a barrel of Brent is
Euro Completely Recovered Its February Losses. On Monday, March 2nd, the major currency pair
How long to the parity for EURUSD?. EURUSD price is continuing to decrease. The last
Correctional Rebound in Oil Died DownGPBUSD: chance of a drop is still thereGold Stopped GrowingBrent oil price to drop down to $50Pound Handled the Brexit with DignityUSDCAD rises to 7-week high above 1.3200
Quotes / Fri 07 / May / 04:46pm

Bitcoin and Gold Prices Diverge Again, Extending 5-Month Correlation. Bitcoin is again feeling the pull of gravity
Markets roll back after last week decline, EURUSD tests the important resistance. Market focus Holidays in the U. S. and
What is crypto-currency in simple words?.   Crypto-currency is electronic virtual or digital money.
How to make money OUT of crypto-currency?How to earn bitcoin?What is bitcoin in simple words?How to buy a bitcoin?
Economic calendar / Friday 07 / May / 07:46pm