USDJPY ended the day in green after the sharp sell-off on Wednesday, erasing intraday’s losses and surpassing the mid-level of the Bollinger Band (20-day simple moving average) and the 40-day SMA as well. The price rebounded on the 38.2% Fibonacci retracement level the of upleg from the 17-month low of 104.45 to the seven-month high of 109.70, near 107.70. 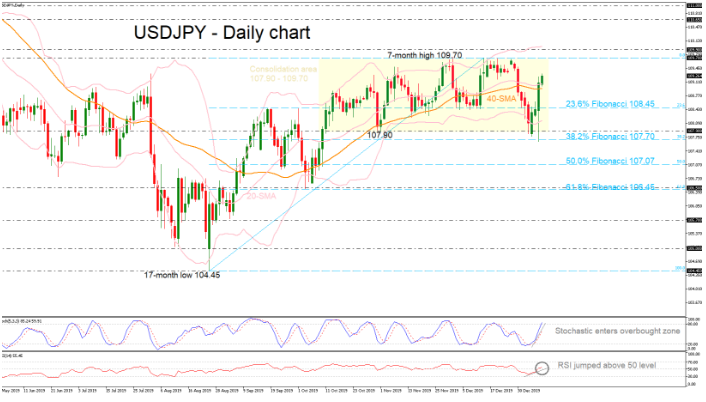 The momentum indicators are pointing to a positive bias in the very short-term with the RSI just above the 50 level and the stochastic oscillator jumping in bullish territory. However, the pair is still trading within a squeezing Bollinger band channel, confirming the trading range 107.90 – 109.70 over the last three months.

In the event of an aggressive break above the 109.70 resistance and the upper Bollinger band near 109.90, USDJPY could hit the next barrier of 110.65, identified by the peak on May 2019. Clearing this zone, the 111.00 handle, taken from the inside swing bottom on April 2019, could attract attention.

However, for a resumption of the longer-term uptrend, USDJPY would need to beat the seven-month high of 109.70.

Oil Under the Gun Again. On Monday morning, a barrel of Brent is
Euro Completely Recovered Its February Losses. On Monday, March 2nd, the major currency pair
How long to the parity for EURUSD?. EURUSD price is continuing to decrease. The last
Correctional Rebound in Oil Died DownGPBUSD: chance of a drop is still thereGold Stopped GrowingBrent oil price to drop down to $50Pound Handled the Brexit with DignityUSDCAD rises to 7-week high above 1.3200
Quotes / Sun 18 / April / 06:51pm

Bitcoin and Gold Prices Diverge Again, Extending 5-Month Correlation. Bitcoin is again feeling the pull of gravity
Markets roll back after last week decline, EURUSD tests the important resistance. Market focus Holidays in the U. S. and
What is crypto-currency in simple words?.   Crypto-currency is electronic virtual or digital money.
How to make money OUT of crypto-currency?How to earn bitcoin?What is bitcoin in simple words?How to buy a bitcoin?
Economic calendar / Sunday 18 / April / 09:51pm