USDJPY spiked above the 200-day simple moving average (SMA) and the 109.00 level on Wednesday but failed to close above it, with the price resuming its previous sideways move. 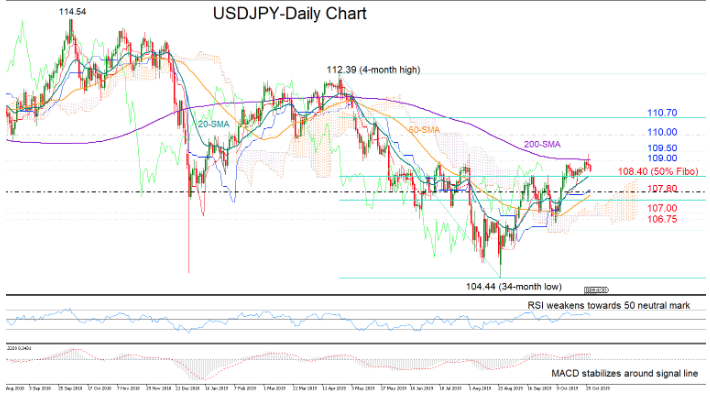 Technically, traders could remain indecisive in the short-term as the RSI is converging towards its 50 neutral mark, the MACD is flattening around its signal line, and the Ichimoku indicators (Kijun-sen and Tenkan-sen) are stabilizing.

As long as the above indicators remain in the bullish area, upside corrections cannot be ruled out. Traders, however, would like to see a decisive rally above the 200-day SMA and more importantly above the 61.8% Fibonacci of 109.50 of the downleg from 112.39 to 104.44, to increase buying orders. Such a move would put the price in an upward direction in the three-month picture and elevate resistance up to 110. Slightly higher, the 78.6% Fibonacci of 110.70 has also curbed upside movements in the past and therefore should attract attention as well.

In case of a downside reversal, the 50% Fibonacci of 108.40 could retake control as it did over the past four weeks. If the bears manage to clear that support, the way could open towards 107.80, which was a respectable barrier during the summer. Further down, another tough wall could appear within the 107.00-106.75 boundaries.

In brief, USDJPY is currently looking neutral both in the short- and medium-term picture and only a successful breach of the 109.50 resistance could resume buying appetite.

Oil Under the Gun Again. On Monday morning, a barrel of Brent is
Euro Completely Recovered Its February Losses. On Monday, March 2nd, the major currency pair
How long to the parity for EURUSD?. EURUSD price is continuing to decrease. The last
Correctional Rebound in Oil Died DownGPBUSD: chance of a drop is still thereGold Stopped GrowingBrent oil price to drop down to $50Pound Handled the Brexit with DignityUSDCAD rises to 7-week high above 1.3200
Quotes / Fri 07 / May / 03:12pm

Bitcoin and Gold Prices Diverge Again, Extending 5-Month Correlation. Bitcoin is again feeling the pull of gravity
Markets roll back after last week decline, EURUSD tests the important resistance. Market focus Holidays in the U. S. and
What is crypto-currency in simple words?.   Crypto-currency is electronic virtual or digital money.
How to make money OUT of crypto-currency?How to earn bitcoin?What is bitcoin in simple words?How to buy a bitcoin?
Economic calendar / Friday 07 / May / 06:12pm