USDJPY to hold between upward-sloping trendlines 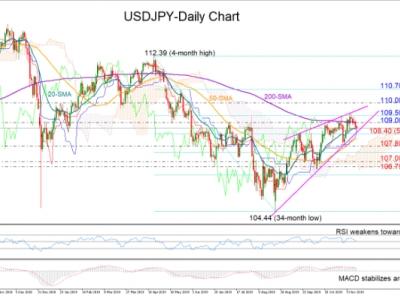 USDJPY erased a portion of last week’s gains after failing to close above 109.50, which is the 61.8% Fibonacci of the downleg from 112.39 to 104.44 and a threshold the pair needs to breach to resume positive direction in the three-month picture.

Technically, the pair could record a neutral session in the short-term as the RSI is pointing downwards to its 50 neutral mark, while the MACD is extending its sideways move around its signal line, with the flattening Tenkan-sen backing the view as well.

On the downside, the ascending trendline from the 34-month low of 104.44 seems to have been supporting negative corrections and therefore should be in focus if the bears gain momentum. The 50% Fibonacci of 108.40 is also in the neighborhood, adding more importance to the area. Moving lower, the 107.80 level could next take control as it did earlier this month, while beneath that, the selling pressure is expected to stretch into the 107.00-106.75 region.

Alternatively, a reversal to the upside may see a retest of the 61.8% Fibonacci of 109.50, though this time traders would also have the resistance trendline from mid-September in mind, which could reject any attempt to reach the 110 mark. Should the rally continue above the latter, 110.70 could be next in  target.

Summarizing, USDJPY is expected to consolidate in the short-term, with the support and resistance trendlines controlling the market action. In the medium-term picture, the pair is looking neutral as long as it holds between 109.50 and 104.44.

How long to the parity for EURUSD?. EURUSD price is continuing to decrease. The last
Correctional Rebound in Oil Died DownGPBUSD: chance of a drop is still thereGold Stopped GrowingBrent oil price to drop down to $50Pound Handled the Brexit with DignityUSDCAD rises to 7-week high above 1.3200
Quotes / Tue 14 / July / 10:12pm
Previous Next