Weak Dollar and Strong Markets after the unexpected Non-farm Payrolls

At the weekend Mexico and the United States announced the deal on trade and migration. This news triggered a 2% spike in the Mexican peso to 19.13 at one point, to levels that preceded the sudden announcement of the imminent introduction of tariffs on Mexican imports. Positive news from the trading front supported the growth of the markets at the start of the week. However, another front — the Chinese — cannot yet boast such a success. The Chinese yuan updates the lows of the year, reaching 6.96 at the end of last week and staying at 6.95 on Monday morning. Now all investors’ attention again turned to disputes between China and the United States, and markets are hoping for a breakthrough in negotiations after Trump and Xi Jinping meet on the G20 (June 28-29). 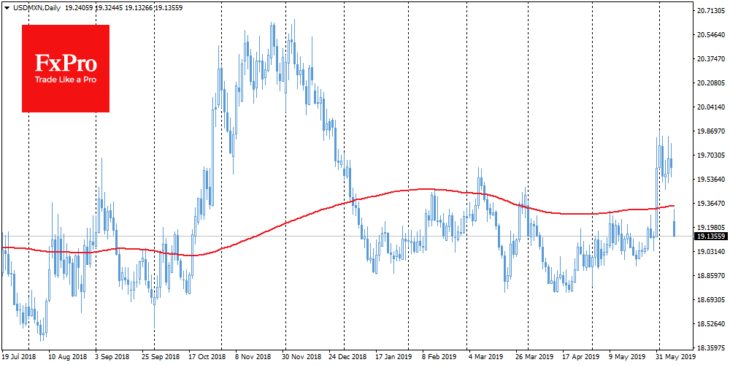 Stocks are rising at the start of trading on Monday. Purchases are supported by a number of factors, from expectations of the world central banks softening of the policies and trade negotiations to investor interest in stocks after the sale in May. The technical picture on SPX is still in favour of the bulls: the index received support after falling below the 200-day moving average. The index is once again enjoying a growth momentum on the news of the US and Mexico deal after closing Friday above MA50. In addition, Friday’s labour market data in the US only increased the pressure on the dollar and spurred speculation about the Fed’s imminent cut of interest rates. 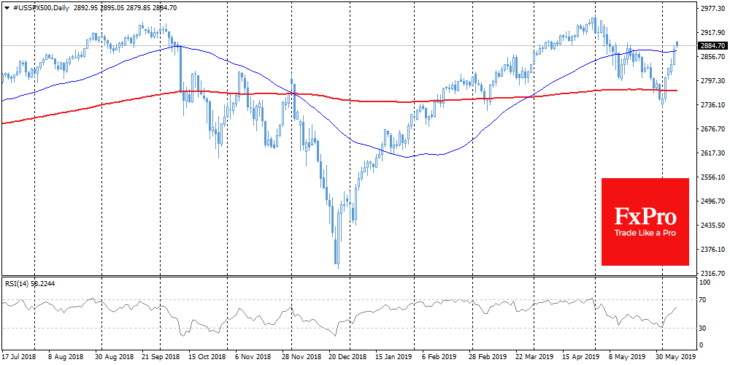 Extremely weak payrolls in the United States (an increase by just 75K against the expected 180K) increased expectations that the Fed will cut rates as early as in June. At the same time, on the eve, the position of the ECB was regarded by investors as less dovish, which caused the strengthening of EURUSD. The pair trades around 1.1300 at the start of trading on Monday after touching 1.1340 on Friday. The pair has already confirmed the breakdown of the downward trend and tried to break through the significant resistance at 1.1300. The next test for the pair may be the level of the 200-day moving average at 1.1369. The intersection of this line is often accompanied by the joining of big capital to the trend, forming a tendency for several months. In this case, EURUSD is quite capable of turning to growth in the region of 1.1500 (round level near the highs of the year) or higher – 1.1700, where there was consolidation in Q3 2018. 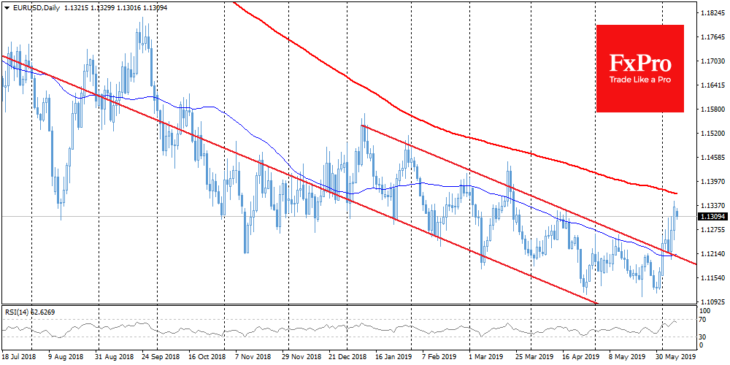 The weakening of the dollar at the end of last week supported gold. As a result, the price of this metal has updated the annual highs at 1348. Nevertheless, the Friday impulse looks more like the final chord of the previous rally. Gold attracted buyers at the end of May due to the global flight from risky assets and sales on stock exchanges. But at the beginning of June, stocks were actively growing, launching a wave of profit-taking on gold. In the coming days, it will not be surprising to see a decline in the precious metal that has lost its main growth driver. 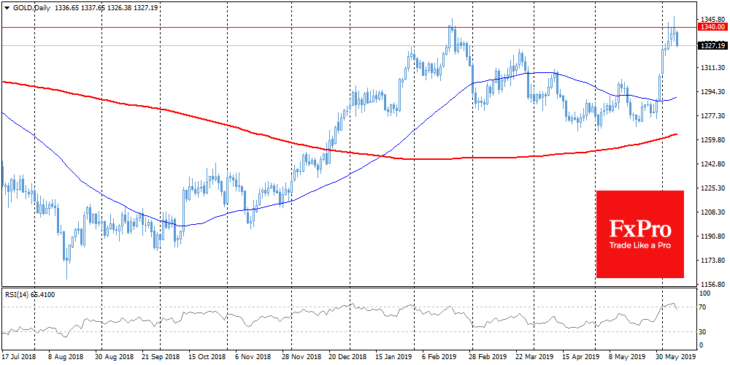 Chart of the day: USDCNH

Chinese yuan updates the minimum of the year against the US currency. This price dynamic is clearly out of the general direction of the markets where the dollar retreated last week. USDCNY stabilized at the end of last month, but spiked on Friday, touching 6.96. The last time we saw such high levels at the end of last year, when investors were selling the yuan, pricing in a quick increase in tariffs for Chinese goods. It is important that this was on the eve of the meeting of Trump and Xi in Buenos Aires, after which a truce was announced. Markets returned the yuan to the same point. The weakening of the Chinese currency should not be liked either by China (as it provokes the outflow from financial markets), or the USA (as it increases the competitiveness of local goods). It is possible that the weakening of the yuan will be a sufficient impetus for both sides to soften the mutual rhetoric in the trade disputes that have been going on for more than a year. 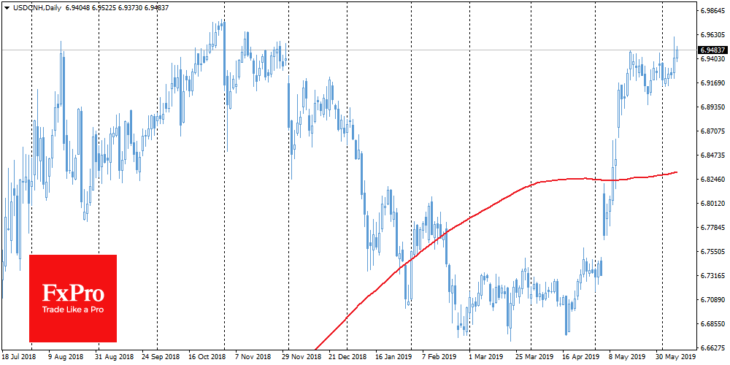 Oil Under the Gun Again. On Monday morning, a barrel of Brent is
Euro Completely Recovered Its February Losses. On Monday, March 2nd, the major currency pair
How long to the parity for EURUSD?. EURUSD price is continuing to decrease. The last
Correctional Rebound in Oil Died DownGPBUSD: chance of a drop is still thereGold Stopped GrowingBrent oil price to drop down to $50Pound Handled the Brexit with DignityUSDCAD rises to 7-week high above 1.3200
Quotes / Fri 26 / February / 09:43pm

Bitcoin and Gold Prices Diverge Again, Extending 5-Month Correlation. Bitcoin is again feeling the pull of gravity
Markets roll back after last week decline, EURUSD tests the important resistance. Market focus Holidays in the U. S. and
What is crypto-currency in simple words?.   Crypto-currency is electronic virtual or digital money.
How to make money OUT of crypto-currency?How to earn bitcoin?What is bitcoin in simple words?How to buy a bitcoin?
Economic calendar / Saturday 27 / February / 12:43am