Yen in distress amid trade optimism and BoJ easing talk 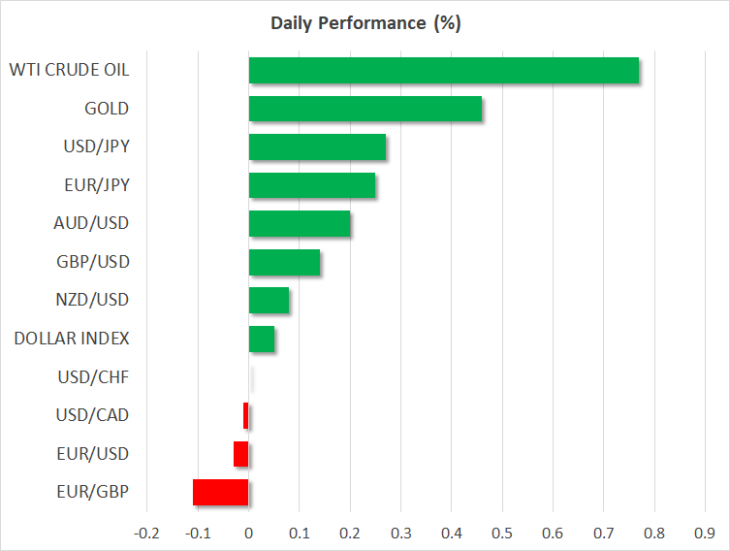 Markets stay in a risk-on mood as trade optimism lingers

The FX market continues to dance to a ‘risk-on’ tune, with moves in recent days being characterized by safe-haven currencies such as the yen retreating, while trade-sensitive currencies like the aussie and the kiwi recover lost ground. Investors seem to be scaling back their defensive exposure and reverting back to a more neutral risk profile, mainly on hopes that something positive may come out of the US-China trade talks in October.

The question now is whether this recovery in risk appetite is sustainable, or whether this is just a relief rally from stretched levels in a bigger trend of risk aversion. In this respect, markets seem to be getting ahead of themselves in pricing progress on trade. We have been here numerous times before, with the two sides meeting in person and striking an optimistic tone, only to see matters escalate again a few weeks later. Even White House trade adviser Navarro played down expectations for near-term progress yesterday.

The bottom line is that nothing has changed drastically enough to warrant any real optimism on trade, something that the stock market seems to be coming to terms with, judging by the sideways moves lately. Global risks have not subsided either, with the European economy in particular still in dire straits. Hence, this recovery in risk appetite looks fragile, and a single negative headline could unravel it.

Yen in distress on BoJ easing talk and trade hopes

For the yen specifically, some recent reports that the Bank of Japan (BoJ) will debate whether to add more stimulus at its meeting next week may have also led traders to close some of their long positions. That said, it’s doubtful just how much the BoJ can do at this stage, as it already has a massive stimulus program in place and therefore has very limited room to ease any further.

As such, the broader outlook for the yen remains bright even if the BoJ acts next week. The Bank has less firepower to ease than its major peers, so in an environment where the Fed, ECB, and BoJ are all easing, the yen would likely outperform the dollar and euro as relative interest rates narrow in Japan’s favor. Not to mention that any wave of risk aversion could see the currency gain rapidly as investors hedge their risky bets.

Elsewhere, perhaps the main headline yesterday was that Trump fired John Bolton, his infamous national security advisor. Bolton is a major hawk on foreign policy issues and was the driving force behind some of Trump’s most aggressive geopolitical moves, like withdrawing from the Iran nuclear deal and reintroducing sanctions.

Hence, his departure may have painted a brighter picture for US-Iran relations, something that oil prices did not like, with WTI sliding on the news amid expectations that Iranian supply could return to the market soon.

Today, oil traders will keep an eye on the weekly EIA crude inventory data, as well as OPEC’s monthly report.

Oil Under the Gun Again. On Monday morning, a barrel of Brent is
Euro Completely Recovered Its February Losses. On Monday, March 2nd, the major currency pair
How long to the parity for EURUSD?. EURUSD price is continuing to decrease. The last
Correctional Rebound in Oil Died DownGPBUSD: chance of a drop is still thereGold Stopped GrowingBrent oil price to drop down to $50Pound Handled the Brexit with DignityUSDCAD rises to 7-week high above 1.3200
Quotes / Mon 14 / June / 06:10am

Bitcoin and Gold Prices Diverge Again, Extending 5-Month Correlation. Bitcoin is again feeling the pull of gravity
Markets roll back after last week decline, EURUSD tests the important resistance. Market focus Holidays in the U. S. and
What is crypto-currency in simple words?.   Crypto-currency is electronic virtual or digital money.
How to make money OUT of crypto-currency?How to earn bitcoin?What is bitcoin in simple words?How to buy a bitcoin?
Economic calendar / Monday 14 / June / 09:10am