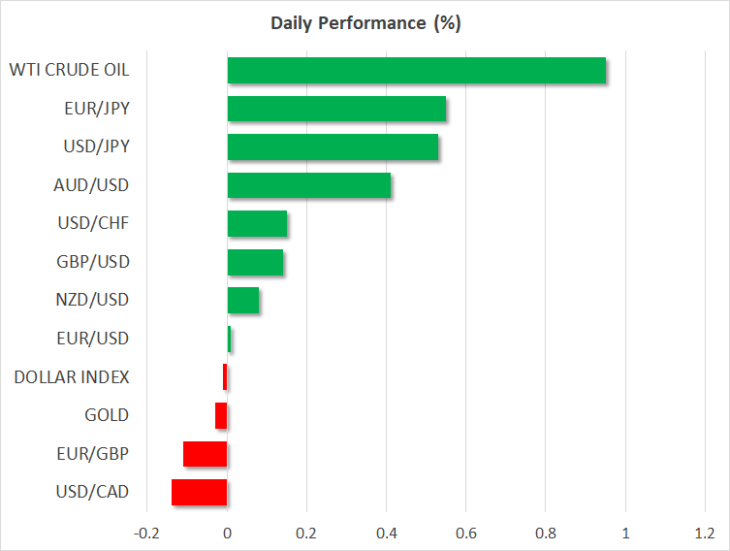 Yuan off lows on PBOC midpoint

The risk-off moves engulfing currency markets since President Trump’s decision last Thursday to slap more tariffs on Chinese goods eased on Tuesday with the help of a steadier yuan. The Chinese currency hit a fresh 11-year low 7.0575 to the US dollar in early onshore trading. But it later firmed to around 7.03 per dollar as a stronger-than-expected daily midpoint by the People’s Bank of China signalled authorities are not looking for a rapid slide in value of the yuan.

The yuan’s rebound triggered a pull back in safe-haven currencies such as the yen and the Swiss franc, which had surged yesterday on the back of the heightened risk aversion. The dollar briefly touched 107 yen before easing to around 106.50, while against the Swiss franc, it recovered to 0.9746 francs after coming close to breaching the 0.97 level.

But the stabilization of the major pairs is likely to be temporary as there appears to be no let up in the US-China trade row. The Trump administration raised the stakes again yesterday after the Treasury Department officially designated China as a currency manipulator for the first time since 1994. However, although the Treasury’s decision piles yet more pressure on China in the intensifying trade dispute, there’s little the US can do to influence China’s exchange rate policy, and more importantly, markets don’t see a risk of the PBOC aiding a steep depreciation of the yuan.

A 3% plunge overnight on Wall Street dragged Asian stocks lower on Tuesday. However, US stock futures turned positive in early European trading as a steadier yuan aided sentiment in the broader markets.

The improving risk appetite lifted the Australian and New Zealand dollars off multi-month lows, and both got an additional boost from better-than-expected domestic data. The aussie benefited from robust trade figures, while an unexpected drop in New Zealand’s unemployment rate in Q3 cast some doubt on rate cut expectations by the Reserve Bank of New Zealand.

The Reserve Bank of Australia left interest rates unchanged at its meeting earlier today, but the statement language was much more dovish, signalling today’s decision was only a temporary pause. The RBNZ will announce its decision tomorrow at 2:00 GMT and is expected to cut rates by 25 basis points. The kiwi is likely to come under renewed pressure if the RBNZ downgrades its growth and inflation forecasts in its latest projections.

Pound up against dollar but struggles versus euro

The wavering dollar brought some short-term respite to European currencies. The euro, in particular, is enjoying some strong positive momentum as futures markets are now predicting Fed rate cuts of up to 100 basis points over the next year following the sharp escalation in trade tensions. This has resulted in US yields falling more rapidly than European ones, therefore narrowing the spread between the two and providing the euro with some much-needed support.

The euro managed to reclaim the $1.12 level but the pound’s gains were much more modest as investors continue to price a higher risk of a disorderly Brexit on October 31. According to press reports, the EU has said it sees “no basis” to hold further negotiations as it refused to remove the Irish backstop from the Withdrawal Agreement. This kept sterling close to yesterday’s two-year low of $0.9249 as time is fast running out for the two sides to agree on a way forward, let alone a revised deal.

Oil Under the Gun Again. On Monday morning, a barrel of Brent is
Euro Completely Recovered Its February Losses. On Monday, March 2nd, the major currency pair
How long to the parity for EURUSD?. EURUSD price is continuing to decrease. The last
Correctional Rebound in Oil Died DownGPBUSD: chance of a drop is still thereGold Stopped GrowingBrent oil price to drop down to $50Pound Handled the Brexit with DignityUSDCAD rises to 7-week high above 1.3200
Quotes / Sat 17 / April / 06:16am

Bitcoin and Gold Prices Diverge Again, Extending 5-Month Correlation. Bitcoin is again feeling the pull of gravity
Markets roll back after last week decline, EURUSD tests the important resistance. Market focus Holidays in the U. S. and
What is crypto-currency in simple words?.   Crypto-currency is electronic virtual or digital money.
How to make money OUT of crypto-currency?How to earn bitcoin?What is bitcoin in simple words?How to buy a bitcoin?
Economic calendar / Saturday 17 / April / 09:16am