To come in:
Google FT

Sberbank shares, which showed excellent results on Friday, on Monday again opened with a gep 7 rubles down. Unfortunately ... While analysts began to dream about the possibility of closing the gep on March 6 in the near future, SBER stock quotes decided to respond to the oil drop and continued to decline. Oil rules the ball, so for now all the attention there. Yesterday, Sberbank announced the release of several services useful for residents of the country, including a remote one who sees a doctor that will help the population at the time of quarantine, but so far this is weak news that is not able to affect the stock prices of Sberbank.

Technically, the SBER picture is similar - moving averages in a downtrend, which we see on the chart. A reversal is possible near the mark of 170 rubles.

The stock price of Sberbank opened with a gep at 10% of the price on Tuesday morning, responding to the global crisis. At the opening of SBER, they immediately lost 22 rubles, at around 198. The market continued to fall until 185, until the Central Bank of the Russian Federation turned on, which offered the minority shareholders the option to buy back Sberbank shares “without placing an offer”, which immediately changed the situation. Now SBER quotes are returning part of the lost positions and are trading at around 202 rubles.

Sberbank shares have finally halted the fall, amid strong bank data released last week. Analysts say that these papers have good growth potential, recommending buying on corrections with an eye on the year. While Sberbank shares are near strong support of 228 rubles, which slowed down the fall, which reflects the MACD indicator. Against the backdrop of positive news, a correction to 242 rubles per paper is possible, but for purchases it is worth waiting for confirmation of a reversal from the indicator.

Sberbank shares finally made it clear to traders that it was time to sell. After much deliberation around the support of 255,5 rubles, quotes fell down and are now trying to gain a foothold at this level. A further decline, if it takes shape, will go to around 248,32 and below.

Sberbank shares continue their decline, which since the beginning of summer has already reached 20% or 46,5%. Of course, now the main idea on which the Russian market is getting cheaper is the expansion of US sanctions against Russia. Against this background, the shares of many companies from different sectors of the economy went down. The banking sector was no exception.
Now Sberbank shares on the border of the channel. If the movement continues, the next figure will be the mark of $ 170 per share. 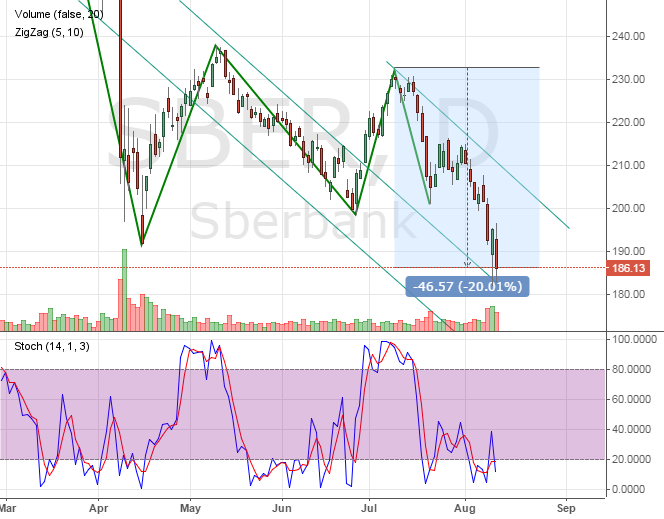 Sberbank is gaining momentum. It is worth buying his shares

It’s very cool that the stock price is visible in real time.

In the week by candlelight it is clear what is planned, if not a bearish trend, then a good correction.

There will be a fall, Ukrainian Sberbank’s daughter blooms + pressure in Europe ...

Sberbank today is the largest bank in Russia, covering 13 areas of the banking sector, as well as those associated with it, and offering its services to almost half of the population throughout the country. The main shareholder of Sberbank is the state - at the legislative level, 50% + 1 share is assigned to it. Other shareholders include Russian and private investors. Sberbank is also the main lender to the Russian economy.

For private clients and companies, Sberbank offers a wide range of services that allows you to work openly and reliably, as well as save and increase your investments. Many Russians prefer to keep money in Sberbank due to state support and a large market share.

Sberbank shares today (ordinary and preferred) are listed on the Moscow Exchange. In addition, the bank's securities are listed on the stock exchanges in London and Frankfurt in the form of depositary receipts (ADRs).

The value of Sberbank shares, indicated on the online charts, is very convenient for assessing opportunities for investing in SBER, as well as for specifying the price of securities for today. Discussions of investors will help to buy shares of Sberbank at the most profitable moment.

Sign up for our newsletter and get the latest news

Sign up for our newsletter and get the latest news