The Moving Average Convergence Divergence (MACD) is a technical indicator which simply shows the relationship of exponential moving averages (EMA). The MACD displays a MACD line (blue), signal line (red) and a histogram, showing the difference between the MACD line and the signal line.

The indicator was developed in 1970 by Gerald Appel to signalize changes in the direction, momentum and the strength of the Forex trends.

MACD is a lagging indicator, which means that its signals appear after the event has begun on the chart. In this relation, the tool has trend-confirming character.

These MACD lines waver in and around the zero line. This gives the MACD the characteristics of an oscillator giving overbought and oversold signals above and below the zero-line respectively.

The MACD crossover is the most popular signal related to the indicator. It involves the intersection of the two lines. In this relation, we recognize two types of MACD crossover:

Authors indicators based on MACD 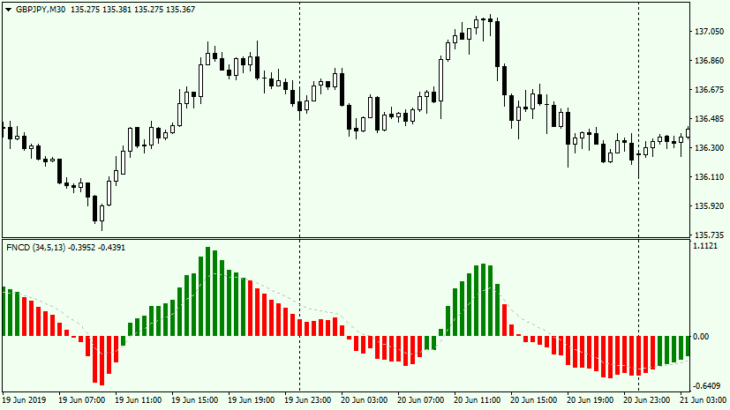 FNCD is an alternative to the MACD. Accordingly, trading with it is possible by a similar signal:

MACD is one of the most popular indicators on the Forex. Visual MACD is another version displayed directly on the price chart. Trading is carried out in accordance with changes if bars’ colors. Closing the trade is made when moving average left the «cloud» area. You are free to choose your own trade tactic using this indicator and include it in your trade strategy.

Oil Under the Gun Again. On Monday morning, a barrel of Brent is
Euro Completely Recovered Its February Losses. On Monday, March 2nd, the major currency pair
How long to the parity for EURUSD?. EURUSD price is continuing to decrease. The last
Correctional Rebound in Oil Died DownGPBUSD: chance of a drop is still thereGold Stopped GrowingBrent oil price to drop down to $50Pound Handled the Brexit with DignityUSDCAD rises to 7-week high above 1.3200
Quotes / Tue 02 / March / 11:31am

Bitcoin and Gold Prices Diverge Again, Extending 5-Month Correlation. Bitcoin is again feeling the pull of gravity
Markets roll back after last week decline, EURUSD tests the important resistance. Market focus Holidays in the U. S. and
What is crypto-currency in simple words?.   Crypto-currency is electronic virtual or digital money.
How to make money OUT of crypto-currency?How to earn bitcoin?What is bitcoin in simple words?How to buy a bitcoin?
Economic calendar / Tuesday 02 / March / 02:31pm