Chart of the Day: EURUSD

Today’s US Federal Reserve policy announcement is expected to be considerably less ‘exciting’ than the Bank of England tomorrow. Having reduced interest rates three times last year, Fed officials believe the economy is now in “a good place” (we get the first estimate of US Q4 GDP tomorrow).Hence, the Fed is widely expected to keep interest rates on hold at the 1.5-1.75% target range. There are no new forecasts at this meeting, so markets will be looking at the statement (which is expected to be broadly little changed from December) and the tone of Chairman Powell’s press conference.

Since December, the US and China have signed a ‘phase one’ trade deal, but the coronavirus outbreak has led to concerns about impact on the global outlook. Powell may be asked about the potential economic effect on the US economy, although it seems too early to tell. Markets have nevertheless upped the odds of a US rate cut later this year. Markets will also be looking for potential further clues from Powell on prospects for the Fed’s Treasury bill purchases to the tune of $60bn a month since October, which are aimed at alleviating pressures in short-term funding markets. They will continue at least into Q2. Although not technically QE, it has led to a re-expansion of the balance sheet and, some argue, to higher asset prices.

The EUR extended its recent decline, dipping below 1.1000 and weighed down some more on the back of the better USD durable goods orders print. There was however a softer underlying component and downward revision, which helped soften the EUR’s blow, while trading desk continues to report medium and longer term players are happy to continue to step in and buy the EUR on dips. Earlier on Tuesday, the ECB said 6 of the 109 banks it evaluated in 2019 had inadequate capital ratios, though four of these banks were said to have ‘addressed the shortfall.’

Citi FX Quant desk released it’s preliminary estimate of month-end FX hedge rebalancing signal calls for net USD selling against all major currencies on Friday, 31 January.  For the first time since January 2019, all of the G10 bond and equity markets have made gains, in local currency terms. The MSCI World index increased by 1.6% in USD terms, year-to-date, while the MSCI US index increased by 2.2%. Global government bond investments, as measured by the FTSE Russell WGBIs, increased by 1.3% in local currency terms, year-to-date. Across all of the G10 currencies the signal to sell USD is greater than 0.5 historical standard deviations. The asset rebalancing signal is stronger than the hedge one and points at USD selling against JPY and EUR at month end. The main event risk around the month end comes from a few US sentiment indicator and economic data releases on the 31st January. The Euro Area is also publishing the January CPI and their Q4 GDP estimates. 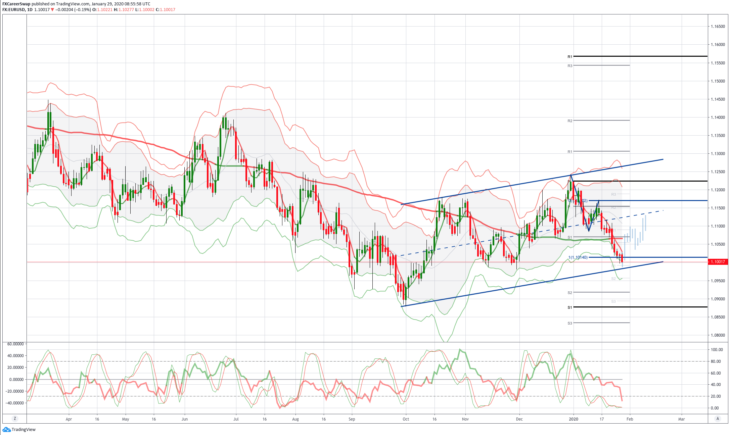 From a technical and trading perspective, as 1.1065 contains upside corrections look for a test of bids and stops below 1.10, a failure below 1.0980 will be a bearish development exposing the 1.0870’s autumn low. On the day only a close back above 1.1040 would suggest that the symmetry & equidistant swing support will stem the downside pressure. Note yesterday’s price action saw a late day reversal, as we witnessed position squaring ahead of pivotal support and headline risk from the FOMC. A daily close today back through 1.1040 could prompt further short covering into the end of the month.

Bitcoin is the lame duck of the crypto market. Bitcoin was down 0.8% on Tuesday, ending the
Bitcoin loses strength due to the stock sell-off. Bitcoin was down 7.4% on Monday, ending at
Bitcoin and Gold Prices Diverge Again, Extending 5-Month Correlation. Bitcoin is again feeling the pull of gravity
Markets roll back after last week decline, EURUSD tests the important resistanceWhat is crypto-currency in simple words?How to make money OUT of crypto-currency?How to earn bitcoin?What is bitcoin in simple words?How to buy a bitcoin?
Economic calendar / Sunday 04 / December / 10:51pm