Chart of the week bearish GBPCAD

GBP: On the Brexit front, media reports suggest the EU will agree to a three-month ‘flextension’ to the Brexit deadline to 31 January, with the option of an earlier departure date if the Withdrawal Agreement is ratified. With the EU reportedly ready to grant an extension to the Brexit deadline by up to three months, the focus turns to an expected vote in the House of Commons today (probably late afternoon at the earliest) where two‑thirds of MPs are needed to consent to an early election on 12 December. It would need the support of Labour, but its leader Jeremy Corbyn yesterday said that it would not support it. If the vote fails, then the government may try to find other ways to instigate an early election.

CAD: The BoC rate decision Wednesday is the data highlight of the week. Regardless of the outlook for easier Fed policy, strong employment growth, higher wages, on target inflation and above expectations growth, mean that policy makers can sit on their hands and await developments, suggesting a neutral hold statement. Industry level GDP and IPPI data for Aug are out Thursday. The October Markit manufacturing PMI is released Friday. 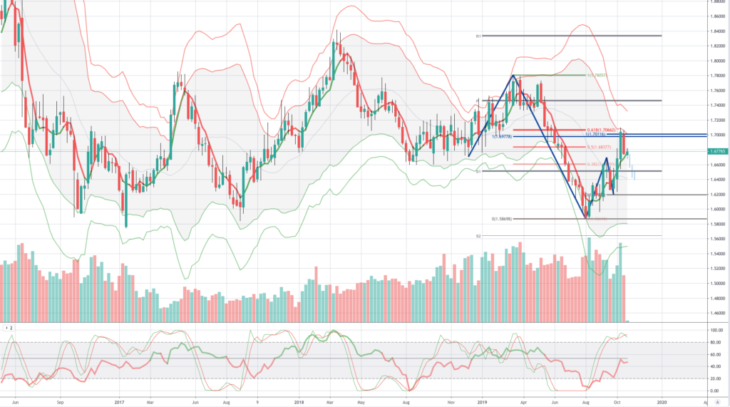 From a technical and trading perspective the GBPCAD posted a bearish inside week reversal last week, after testing pivotal resistance at the 1.7000 (which retained symmetry and equidistant swing significance, coinciding with the 61.8% Fib retracement of the last decline), as 1.7000 continues to cap the correction, look for a breach of last weeks lows to open a test of 1.6400 as support, only new highs for the week will negate this view.

Oil Under the Gun Again. On Monday morning, a barrel of Brent is
Euro Completely Recovered Its February Losses. On Monday, March 2nd, the major currency pair
How long to the parity for EURUSD?. EURUSD price is continuing to decrease. The last
Correctional Rebound in Oil Died DownGPBUSD: chance of a drop is still thereGold Stopped GrowingBrent oil price to drop down to $50Pound Handled the Brexit with DignityUSDCAD rises to 7-week high above 1.3200
Quotes / Mon 17 / May / 09:34am

Bitcoin and Gold Prices Diverge Again, Extending 5-Month Correlation. Bitcoin is again feeling the pull of gravity
Markets roll back after last week decline, EURUSD tests the important resistance. Market focus Holidays in the U. S. and
What is crypto-currency in simple words?.   Crypto-currency is electronic virtual or digital money.
How to make money OUT of crypto-currency?How to earn bitcoin?What is bitcoin in simple words?How to buy a bitcoin?
Economic calendar / Monday 17 / May / 12:35pm