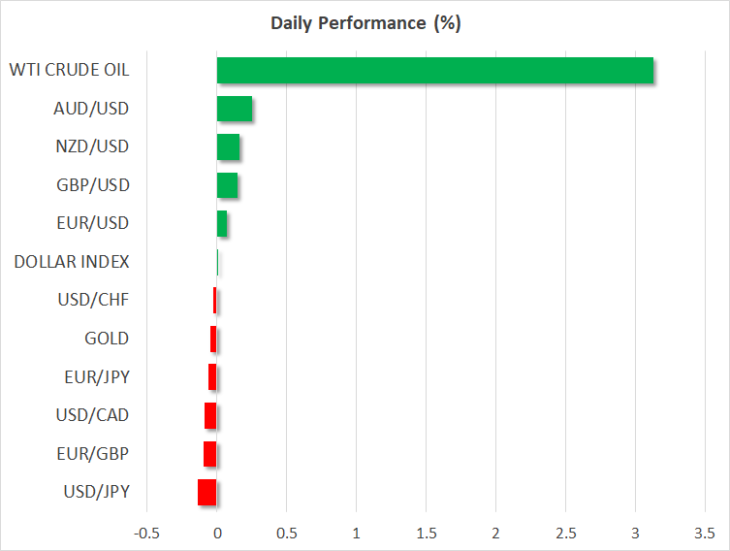 China reported unexpectedly strong export numbers on Thursday, adding some cheer to a gloomy market environment.  Exports were up 3.3% annually in July, beating forecasts of a 2.0% drop. Imports also came in at a better-than-expected -5.6%, suggesting domestic demand is not as weak as feared. However, while the positive data managed to provide some boost to risk sentiment, markets remain dogged by worsening trade tensions and intensifying fears of a global recession.

Stocks in Asia were mostly in positive territory, with China’s blue-chip CSI 300 index ending the day 1.2% higher. European and US stock futures are pointing to a strong open after Wall Street shares managed to reverse a sharp drop overnight to close flat.

Also helping markets steady was a firmer-than-expected fixing of the yuan’s midpoint by the People’s Bank of China today. Although the midpoint was set above the critical 7 level for the first time since 2008, markets were expecting an even weaker fix and the move further reassured investors that Chinese authorities are not seeking to devalue the currency.

Antipodeans bounce off lows; yen eases but not much

The Australian and New Zealand dollars were still reeling from yesterday’s dramatic sell-off following the Reserve Bank of New Zealand’s shock decision to slash rates by 50 basis points. Both currencies were firmer on Thursday, with the aussie recovering to around $0.6775, but the kiwi was a bit more sluggish, crawling back above the $0.64 level, as the RBNZ’s Assistant Governor, Christian Hawkesby, reiterated that the central bank was “completely open” to cutting rates to negative in an interview earlier today.

Markets will next be looking for rate cut clues from the Reserve Bank of Australia, which is due to publish its quarterly forecasts tomorrow and Governor Philip Lowe will testify before Parliament at 23:30 GMT.

Central banks globally have been rushing to lower borrowing costs amid growing fears the world economy is headed for a recession as there appears no end in sight to the long-running trade dispute between the United States and China. Although markets were relieved that the US and China have signalled a willingness to go ahead with scheduled trade talks in September, President Trump kept the markets guessing as to whether will ever sign up to a deal, telling reports “China was killing us with unfair trade deals”.

The uncertainty is keeping safe-havens assets elevated, with the yen easing only marginally today. The dollar was slightly lower at 106.08 yen and the euro was hovering around 119 yen, not far from this week’s 2-year low.

Gold – a big beneficiary of the latest flight to safety – broke above the $1500 level yesterday to hit fresh 6-year highs as sovereign bond yields plunged globally. The rush to the safety of government bonds was triggered after the Reserve Bank of India and the Bank of Thailand followed the RBNZ in slashing interest rates. Meanwhile, the Philippine central bank was the latest to announce a rate cut today.

The European Central Bank is certain to ease policy in September and traders have once against started to price in aggressive rates by the US Federal Reserve. The expectations of more central bank action pushed the yield on 10-year Treasury Notes to 3-year lows yesterday, widening the gap with 3-month Treasuries and fuelling talk of a global recession. This only puts more pressure on the Fed to start cutting rates aggressively to thwart a possible downturn and Fed speakers in the coming weeks will be watched carefully for any shift in that direction.

Oil Under the Gun Again. On Monday morning, a barrel of Brent is
Euro Completely Recovered Its February Losses. On Monday, March 2nd, the major currency pair
How long to the parity for EURUSD?. EURUSD price is continuing to decrease. The last
Correctional Rebound in Oil Died DownGPBUSD: chance of a drop is still thereGold Stopped GrowingBrent oil price to drop down to $50Pound Handled the Brexit with DignityUSDCAD rises to 7-week high above 1.3200
Quotes / Sat 17 / April / 05:53am

Bitcoin and Gold Prices Diverge Again, Extending 5-Month Correlation. Bitcoin is again feeling the pull of gravity
Markets roll back after last week decline, EURUSD tests the important resistance. Market focus Holidays in the U. S. and
What is crypto-currency in simple words?.   Crypto-currency is electronic virtual or digital money.
How to make money OUT of crypto-currency?How to earn bitcoin?What is bitcoin in simple words?How to buy a bitcoin?
Economic calendar / Saturday 17 / April / 08:53am