The global financial markets remain under pressure, gripped by fears of the new coronavirus’ impact on the economy. Chinese exchanges stayed closed from Thursday due to the Lunar New Year, but other Asian and European markets are showing the full extent of fear of the new disease.

Japanese Nikkei225 is declining by more than 1.2% since the start of trading on Monday. Futures on Euro50 lose the same amount at the beginning of trading, returning to drop after the break on Friday. 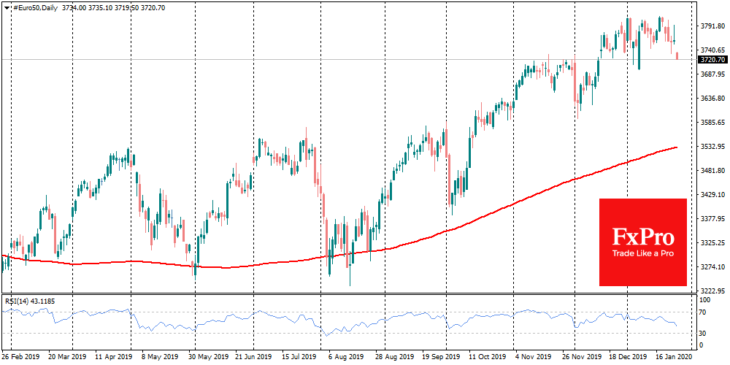 However, Oil shows the most prominent price dynamics. Brent declined to $58.50, its lowest level since October last year. Although formally there is a logic behind the Crude’s decline, this situation is mostly because that Oil was the weakest link in the chain.

News about the spread of the Chinese сoronavirus has been pressing on Brent all last week, causing prices to decline by more than $6.5 or 10%. Apparently, the coronavirus story made investors take a critical look at the assets after the rally of previous months. Crude Oil showed weakness not only because of the coronavirus. 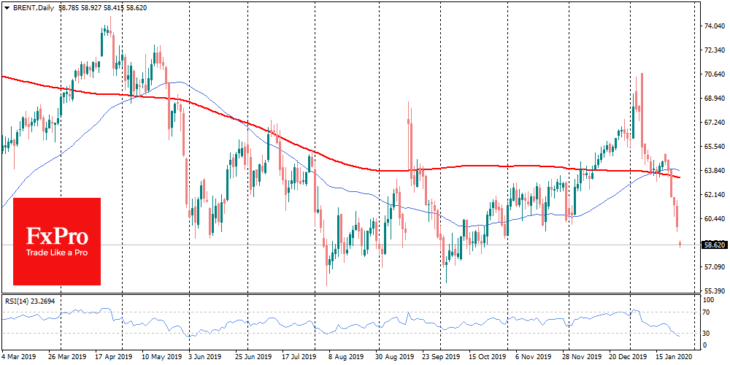 It was indicative of how quickly it returned to decline at the beginning of the month after the ease of tension between Iran and the US. As is often the case in markets, strong movements are rarely caused by just one reason.

In our case, it is worth paying attention to the growth of production in the US to a record 13 million barrels per day combined with high reserves. This situation brings investors back to fears that the cuts from OPEC+ agreed at the end of 2019 may not be enough to rebalance supply and demand in the markets.

Recently, the cartel indicated that the market will still have an excess of about 1mln BPD in the first half of the year. This market move is a clear indication that OPEC+ may be required to make another attempt to rebalance the market.

OPEC globally expects that consumption growth will start to accelerate after signing Phase 1 of the China-US trade agreement. However, one should remember that the growth rate of the Chinese economy in 2019 was the lowest in more than 20 years. Also, the IMF has recently reduced its forecast for global economic growth in 2020 due to lower expectations from India.

China and India are the second and third world economies, respectively. However, they are developing economies, i.e. their oil consumption is not as optimized as in Europe and Japan. Lower growth forecasts in these countries are much more worrying for the global energy market than, say, the slowing down of the US and Europe.

This logic makes us think that oil quotations are still in the search mode of the bottom. We cannot rule out that it will be found at levels markedly below $50 per barrel of Brent.

Bitcoin is the lame duck of the crypto market. Bitcoin was down 0.8% on Tuesday, ending the
Bitcoin loses strength due to the stock sell-off. Bitcoin was down 7.4% on Monday, ending at
Bitcoin and Gold Prices Diverge Again, Extending 5-Month Correlation. Bitcoin is again feeling the pull of gravity
Markets roll back after last week decline, EURUSD tests the important resistanceWhat is crypto-currency in simple words?How to make money OUT of crypto-currency?How to earn bitcoin?What is bitcoin in simple words?How to buy a bitcoin?
Economic calendar / Tuesday 29 / November / 06:33am