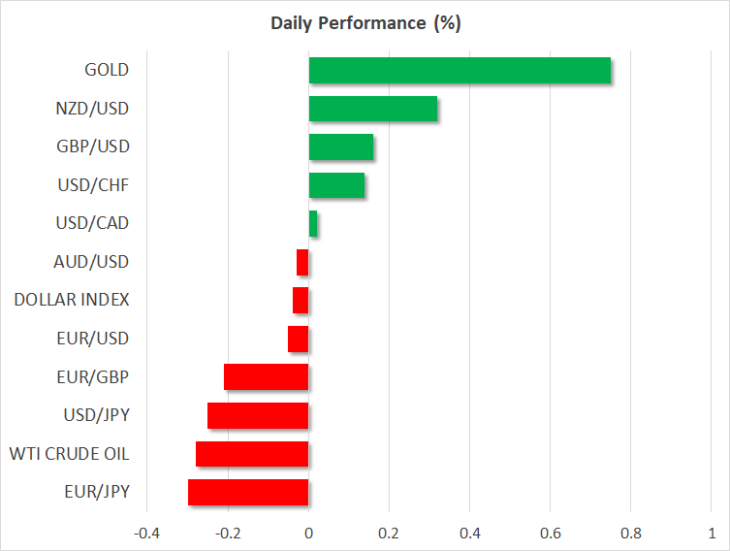 The faint optimism that US President Trump and Chinese President Xi will be able to resolve some of their trade difference faded late on Monday after a senior US official revealed that Trump would be “comfortable with any outcome” from the talks scheduled at the G20 summit. US and Chinese trade officials agreed overnight to resume trade negotiations in preparation ahead of the high-stakes meeting, but this wasn’t enough to lift sentiment.

It follows a much more positive tone over the weekend about the planned meeting between the two leaders and while the uncertainty about the prospect of a breakthrough at the June 28-29 summit dragged risk assets lower on Tuesday, investors are unlikely to take big positions until the talks have concluded.

China’s blue-chip CSI 300 index ended the day 0.9% lower today and US and European stock futures were pointing to losses of between 0.25% and 0.50%.  The safe-have gold, meanwhile, which tends to benefit from risk aversion and geopolitical tensions, surged to a fresh six-year high of $1438.63 an ounce.

US announces new sanctions on Iran

Further supporting gold on Tuesday was the announcement by President Tump of new sanctions on Iran, which target key figures in the country, including Supreme Leader Ali Khamenei. The move, seen as largely symbolic due to the limited number of sanctions remaining that the US can still impose, threatens to escalate the situation even as the Trump administration attempts to push Iran to the negotiating table.

Aside from gold, the Japanese yen and the Swiss franc also gained on the increased risk-off mood, particularly against the US dollar, which is under pressure from burgeoning expectations that the Fed will cut rates at its July meeting. The greenback slipped below key levels, touching a 5½-month low of 106.77 versus the yen and a 9-month trough of 0.9691 against the franc.

The euro and pound also trampled on the weakening dollar, with the single currency flirting with the $1.14 handle at 3-month highs and sterling advancing towards the $1.2750 area. Although the outlook for the Eurozone and the UK is not much brighter than the US’s, the ECB has limited scope to cut rates, while the Bank of England is maintaining its tightening bias, giving the currencies an edge over their US counterpart.

With US rate cut expectations running wild, investors will carefully be watching what Fed policymakers will signal from their scheduled speeches later today. A number of Fed officials will be hitting the podium, including Raphael Bostic (Atlanta Fed), James Bullard (St. Louis Fed) and John Williams (New York Fed). But the spotlight will be on the Fed Chairman, Jerome Powell, who’s due to speak at 17:00 in New York.

Investors will be eagerly waiting for more hints from Powell & Co that rates could be cut as early as the July meeting. However, with traders possibly getting ahead of themselves as Fed funds futures are now indicating a 69% probability of a 50 basis points reduction in July, there’s a growing risk that the Fed may not live up to the markets’ expectations, opening the way for a major correction in the dollar and bond prices.

Oil Under the Gun Again. On Monday morning, a barrel of Brent is
Euro Completely Recovered Its February Losses. On Monday, March 2nd, the major currency pair
How long to the parity for EURUSD?. EURUSD price is continuing to decrease. The last
Correctional Rebound in Oil Died DownGPBUSD: chance of a drop is still thereGold Stopped GrowingBrent oil price to drop down to $50Pound Handled the Brexit with DignityUSDCAD rises to 7-week high above 1.3200
Quotes / Sun 18 / April / 05:37pm

Bitcoin and Gold Prices Diverge Again, Extending 5-Month Correlation. Bitcoin is again feeling the pull of gravity
Markets roll back after last week decline, EURUSD tests the important resistance. Market focus Holidays in the U. S. and
What is crypto-currency in simple words?.   Crypto-currency is electronic virtual or digital money.
How to make money OUT of crypto-currency?How to earn bitcoin?What is bitcoin in simple words?How to buy a bitcoin?
Economic calendar / Sunday 18 / April / 08:37pm