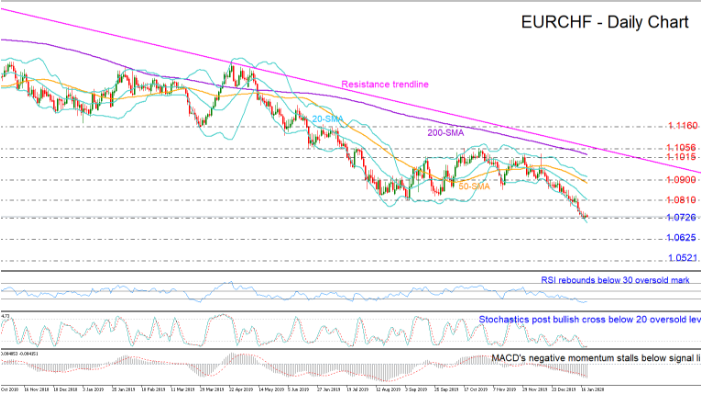 With the RSI and the Stochastics rebounding deep in the oversold area, the MACD stabilizing below its red signal line and the price deviating slightly above the lower Bollinger band, the odds for an upside correction seem to be elevated.

A forceful rally above the September low of 1.0810 and the middle Bollinger band could generate additional buying interest, sending resistance probably near 1.0900 which the bulls failed to overcome in late December. Higher, a more important barrier could appear within the 1.1015-1.1056 area, where the 200-day simple moving average (SMA) and a tentative resistance trendline from the 2018 highs are placed. Clearing that region, the price could search for a higher high around 1.1160, increasing confidence that an uptrend may be in progress.

In the negative scenario, an extension to the downside could bottom somewhere between 1.0625 and 1.0521 where the market found strong support and resistance during the 2015-2017 period. Breaching that level, the price could revisit the 2015 trough of 1.0232.

Overall, EURCHF is trading bearish with a potential for an upside correction in the short-term. Only a rally above 1.1056 could raise doubts about the long-term downtrend.