GBPUSD failed several times to jump above the 20-day moving average and the 23.6% Fibonacci retracement level of the downward wave from 1.3380 to 1.2560, near 1.2753, suggesting weak momentum in the daily timeframe. 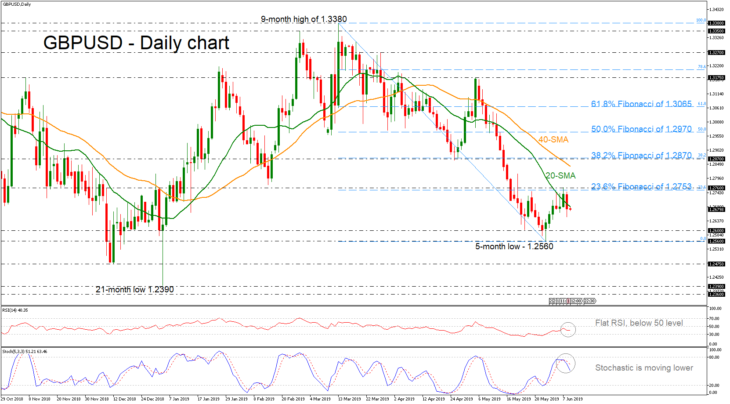 The negative to neutral bias in the near term is supported by the deterioration in the momentum indicators. The %K line of the stochastic oscillator has fallen sharply below the overbought zone, while the RSI indicator is flattening in the negative territory.

The 1.2600 psychological level has proven a reliable support level in previous sessions and therefore should be closely watched in case of negative momentum. Even deeper, a significant decline below the five-month low of 1.2560 would open the way towards the 1.2475 area.

On the flipside, immediate resistance to upside movements could emerge around 1.2753 – 1.2760 and a closing price above them could prove more important for the rally to continue. Even higher, a taller wall could be holding around the 38.2% Fibonacci of 1.2870, but the pair needs to first surpass the 40-day SMA – currently at 1.2840.

Concluding, downside risks have somewhat increased in the short-term as the technical indicators are supporting a bearish to neutral bias, while in the medium-term the bearish outlook remains.

Oil Under the Gun Again. On Monday morning, a barrel of Brent is
Euro Completely Recovered Its February Losses. On Monday, March 2nd, the major currency pair
How long to the parity for EURUSD?. EURUSD price is continuing to decrease. The last
Correctional Rebound in Oil Died DownGPBUSD: chance of a drop is still thereGold Stopped GrowingBrent oil price to drop down to $50Pound Handled the Brexit with DignityUSDCAD rises to 7-week high above 1.3200
Quotes / Mon 19 / April / 02:49am

Bitcoin and Gold Prices Diverge Again, Extending 5-Month Correlation. Bitcoin is again feeling the pull of gravity
Markets roll back after last week decline, EURUSD tests the important resistance. Market focus Holidays in the U. S. and
What is crypto-currency in simple words?.   Crypto-currency is electronic virtual or digital money.
How to make money OUT of crypto-currency?How to earn bitcoin?What is bitcoin in simple words?How to buy a bitcoin?
Economic calendar / Monday 19 / April / 05:49am