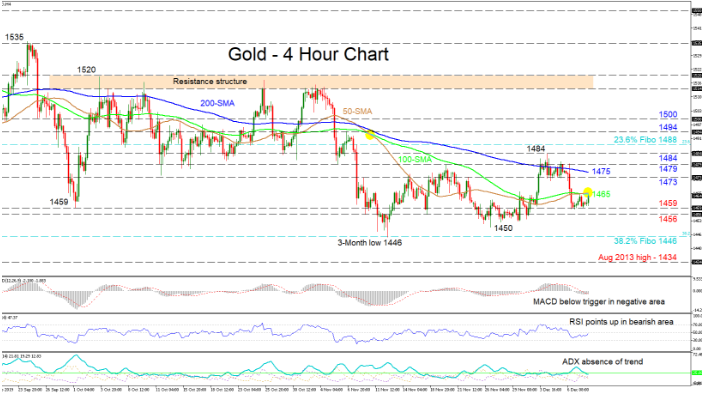 Gold’s recent push lower has come to a standstill at the 1459 level while at the same time the ADX indicates an absence of a trend. The loss in steam – in the still neutral-to-bearish picture – is also reflected by the flattening of the 50- and 100-period simple moving averages (SMAs) and the short-term oscillators.

The oscillators reflect a stall in negative momentum. The MACD, is in the negative region and below its red trigger line but has eased slightly. The RSI is climbing in the bearish zone and approaching the 50 level. Noteworthy is the convergence of the 50- and 100-period SMAs, with the 200-period SMA not too far away, which could all suggest that a sideways move could last a while longer.

Summarizing, a neutral-to-bearish bias still exists in the short-term and a break below 1446 would only reinforce the negative outlook.

Oil Under the Gun Again. On Monday morning, a barrel of Brent is
Euro Completely Recovered Its February Losses. On Monday, March 2nd, the major currency pair
How long to the parity for EURUSD?. EURUSD price is continuing to decrease. The last
Correctional Rebound in Oil Died DownGPBUSD: chance of a drop is still thereGold Stopped GrowingBrent oil price to drop down to $50Pound Handled the Brexit with DignityUSDCAD rises to 7-week high above 1.3200
Quotes / Sun 18 / April / 06:23pm

Bitcoin and Gold Prices Diverge Again, Extending 5-Month Correlation. Bitcoin is again feeling the pull of gravity
Markets roll back after last week decline, EURUSD tests the important resistance. Market focus Holidays in the U. S. and
What is crypto-currency in simple words?.   Crypto-currency is electronic virtual or digital money.
How to make money OUT of crypto-currency?How to earn bitcoin?What is bitcoin in simple words?How to buy a bitcoin?
Economic calendar / Sunday 18 / April / 09:23pm