Gold has declined considerably over the last couple of trading days after the touch on the almost seven-year peak of 1,611 on January 8. The price entered the Ichimoku cloud and is capped by the bearish crossover within the short-term 20- and 40-period simple moving averages (SMAs), assuming a negative correction. 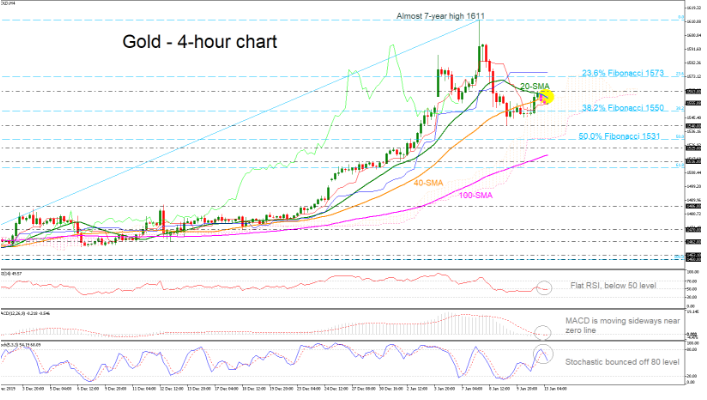 The technical indicators in the 4-hour chart seem to be neutral to bearish. The RSI indicator has just dropped beneath the 50 level with nearly flat momentum, while the MACD oscillator is moving sideways around the zero level. However, the stochastic bounced off the 80 territory and created a negative cross between the %K and %D lines.

Immediate support to further downside pressure may be taking place around the 38.2% Fibonacci retracement level of the upward wave from 1,450 to 1,611, near 1,550 and the 1,540 mark, which could provide additional support in case of steeper losses.

Should the price decisively close above the roof of the 1,563 resistance, the 20-period SMA could move towards the 23.6% Fibo of 1,573. Further advances above this level could then target the area around the seven-year high of 1,611, extending the medium-term uptrend.

All in all, the yellow metal is creating a retracement to the downside, confirmed by the momentum indicators in the near-term.

Oil Under the Gun Again. On Monday morning, a barrel of Brent is
Euro Completely Recovered Its February Losses. On Monday, March 2nd, the major currency pair
How long to the parity for EURUSD?. EURUSD price is continuing to decrease. The last
Correctional Rebound in Oil Died DownGPBUSD: chance of a drop is still thereGold Stopped GrowingBrent oil price to drop down to $50Pound Handled the Brexit with DignityUSDCAD rises to 7-week high above 1.3200
Quotes / Sun 18 / April / 06:17pm

Bitcoin and Gold Prices Diverge Again, Extending 5-Month Correlation. Bitcoin is again feeling the pull of gravity
Markets roll back after last week decline, EURUSD tests the important resistance. Market focus Holidays in the U. S. and
What is crypto-currency in simple words?.   Crypto-currency is electronic virtual or digital money.
How to make money OUT of crypto-currency?How to earn bitcoin?What is bitcoin in simple words?How to buy a bitcoin?
Economic calendar / Sunday 18 / April / 09:17pm