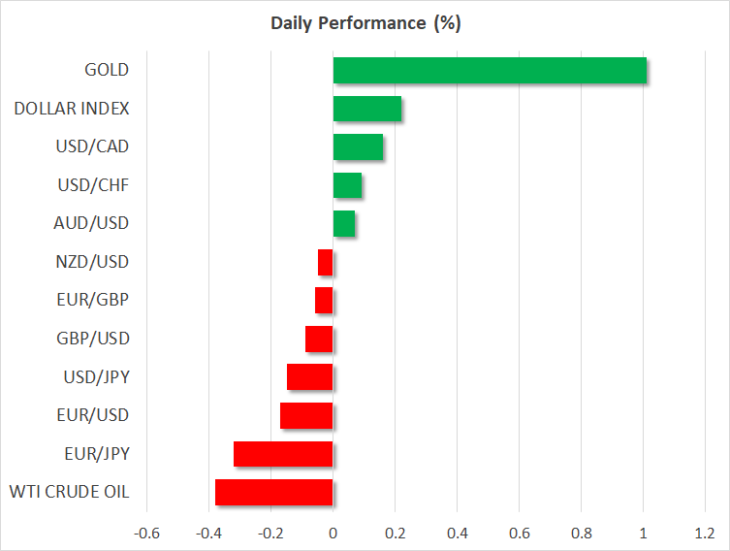 Risk aversion was the name of the game on Monday, as worrisome political headlines triggered another rotation away from risky assets like stocks, and into the safety of havens like the Japanese yen and gold. US equity markets closed more than 1% lower, while the yen advanced across the board, further solidifying its status as the best-performing major currency this year. Gold reached a new six-year high above $1520/ounce.

The main catalyst behind these moves were reports that China is assembling military forces near Hong Kong, which sent the message that Beijing may be about to crush the protests soon. Markets probably grasped the gravitas of the situation after US Senate leader Mitch McConnell tweeted a warning to China saying: “any violent crackdown would be completely unacceptable. … The world is watching”.

The bottom line is that China’s actions in Hong Kong could have spillover effects on the trade war with Washington. Things were already not looking good on the trade front, so the headlines likely reinforced the notion that any deal won’t be coming soon. For now, risk aversion may continue to dominate markets, especially in the absence of any other noteworthy news to distract investors.

The other key factors that may have dampened risk sentiment are Italian political worries and the collapse of Argentinian markets.

Italy’s fragile coalition government seems ready to collapse, as the two coalition party leaders keep attacking each other, with Di Maio saying yesterday that Salvini “betrayed” the Italian people. A no-confidence motion in the government may be triggered any day now, keeping political risk in Europe very much alive. The euro has been rather resilient to such worries so far, but that could change quickly if the Eurozone’s third-largest economy is thrown into a political abyss.

In Argentina, the peso collapsed along with the nation’s stock market, after incumbent President Macri lost early primary elections by a wide margin, bringing into question whether his austerity-driven policies will continue.

In the UK, employment figures for June are due for release. Another solid jobs report is expected, but it’s doubtful whether even stellar data can lift the battered pound at this juncture, given how heightened Brexit risks are.

In Germany, the ZEW survey for August could provide a glimpse on whether Europe’s growth engine is still struggling, which may in turn have implications for how forcefully the ECB will act in September.

Over in the US, CPI inflation numbers for July may attract some attention. Market pricing suggests that another quarter-point Fed rate cut in September is virtually certain, and also assigns a ~35% probability for a more aggressive half-point rate reduction. However, much like the story before the July meeting, a half-point move seems excessive and if policymakers push back against the market’s dovishness in the coming weeks, that could lift the dollar. 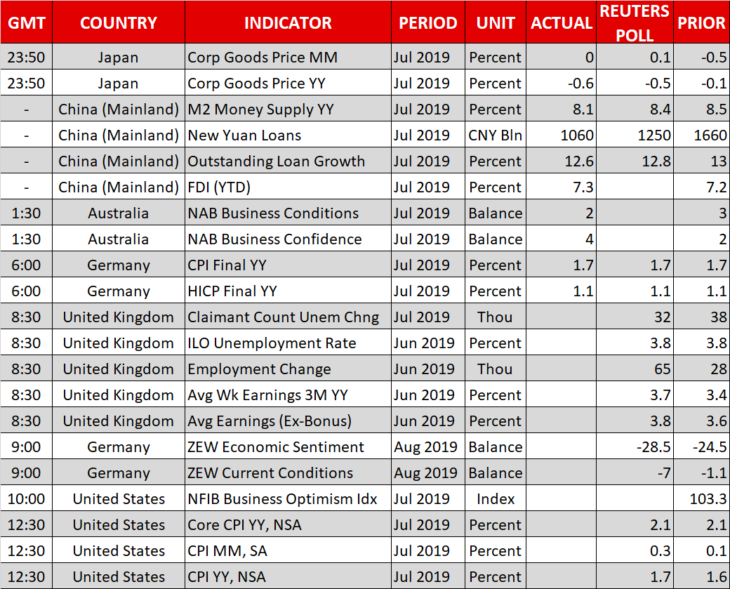 Oil Under the Gun Again. On Monday morning, a barrel of Brent is
Euro Completely Recovered Its February Losses. On Monday, March 2nd, the major currency pair
How long to the parity for EURUSD?. EURUSD price is continuing to decrease. The last
Correctional Rebound in Oil Died DownGPBUSD: chance of a drop is still thereGold Stopped GrowingBrent oil price to drop down to $50Pound Handled the Brexit with DignityUSDCAD rises to 7-week high above 1.3200
Quotes / Sat 17 / April / 06:12am

Bitcoin and Gold Prices Diverge Again, Extending 5-Month Correlation. Bitcoin is again feeling the pull of gravity
Markets roll back after last week decline, EURUSD tests the important resistance. Market focus Holidays in the U. S. and
What is crypto-currency in simple words?.   Crypto-currency is electronic virtual or digital money.
How to make money OUT of crypto-currency?How to earn bitcoin?What is bitcoin in simple words?How to buy a bitcoin?
Economic calendar / Saturday 17 / April / 09:12am