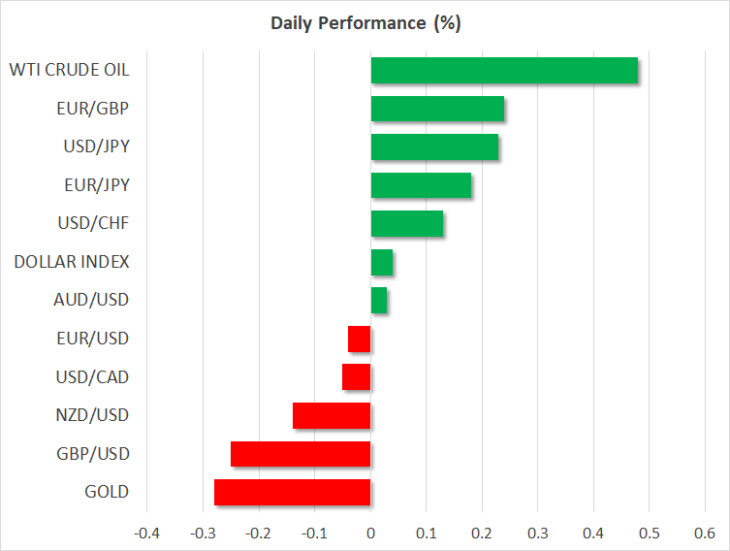 Calm in currency markets ahead of key Fed events

Major pairs were trading sideways on Wednesday as markets turned cautious ahead of the minutes of the Fed’s July meeting and the upcoming speech by Fed Chairman Jerome Powell on Friday. Investors are anxiously waiting for the release of the July FOMC minutes (due at 18:00 GMT) for a better insight on the views of the hawks within the committee.  Boston Fed President Eric Rosengren, who voted against a cut in July, signalled earlier this week he hasn’t changed his mind about the need for policy easing.

But even more important will be the views of Powell who will address the Fed’s annual economic symposium in Jackson Hole on Friday. Markets have fully priced in another 25-basis points rate cut in September, but the odds of a bigger 50 bps reduction have been fluctuating widely. They’ve come down sharply in recent days and currently stand at just 6.3% so should Powell flag only a 25-bps cut and chooses his words more carefully than he did at the July press conference, there’s likely to be limited reaction in forex markets.

The US dollar eased from near three-week highs against a basket of currencies yesterday but managed to recoup most of its losses versus the yen today, climbing back to around 106.55 yen. The Japanese currency was broadly weaker and gold also slipped, testing the $1500/ounce level even as US President Trump gave markets another reminder that trade tensions won’t go away anytime soon.

Trump told reporters on Tuesday, “Somebody had to take China on” and risked triggering a military confrontation with the country after the US State Department approved the sale of F-16 fighter jets to Taiwan, which China considers it to be part of its territory.

Another escalation in trade and geopolitical tensions with China could reverse the bounce in risk appetite enjoyed since late last week, which has been driven by announcements of stimulus by policymakers around the world.

The euro was steady on Wednesday, having barely reacted to the resignation of the Italian Prime Minister Giuseppe Conte yesterday following the vote of no-confidence motion put forward by his deputy, Matteo Salvini. Markets don’t seem worried by the possibility of a snap general election which could give Salvini’s League party the majority it wants to form a government without the support of the Five Star Movement. In fact, Italian government bond yields spiked lower on the news as investors hoped this could pave the way for a more stable government.

The pound was a little more volatile however, as it briefly plunged to $1.2063 after the European Union rejected British Prime Minister Boris Johnson’s latest request for the Irish backstop to be dropped from the Withdrawal Agreement. Johnson has said the UK won’t hold any new talks on a Brexit deal unless the “undemocratic” backstop is removed, while the EU are insisting that the Withdrawal Agreement is not up for renegotiation. The pound then jumped to $1.2181 after German Chancellor Angela Merkel said the EU is open to “practical solutions” to the Irish border issue but without removing the backstop from the agreement.

However, cable has since eased to around $1.2135 after the British government indicated it will begin scaling back the number of UK officials in the EU in 10 days’ time, keeping the threat of a no-deal Brexit alive. Traders will next be looking to the meeting between Johnson and Merkel later today for any signs of progress.

In other currencies, the Canadian dollar was struggling near two-month lows versus the greenback ahead of Canadian inflation data due later today. The loonie is likely to come under additional pressure if the CPI numbers decline as expected, which would give the Bank of Canada some leeway to cut rates.

Oil Under the Gun Again. On Monday morning, a barrel of Brent is
Euro Completely Recovered Its February Losses. On Monday, March 2nd, the major currency pair
How long to the parity for EURUSD?. EURUSD price is continuing to decrease. The last
Correctional Rebound in Oil Died DownGPBUSD: chance of a drop is still thereGold Stopped GrowingBrent oil price to drop down to $50Pound Handled the Brexit with DignityUSDCAD rises to 7-week high above 1.3200
Quotes / Sat 17 / April / 05:33am

Bitcoin and Gold Prices Diverge Again, Extending 5-Month Correlation. Bitcoin is again feeling the pull of gravity
Markets roll back after last week decline, EURUSD tests the important resistance. Market focus Holidays in the U. S. and
What is crypto-currency in simple words?.   Crypto-currency is electronic virtual or digital money.
How to make money OUT of crypto-currency?How to earn bitcoin?What is bitcoin in simple words?How to buy a bitcoin?
Economic calendar / Saturday 17 / April / 08:33am