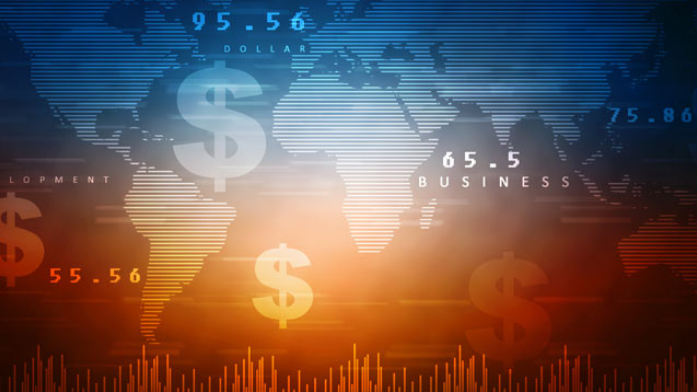 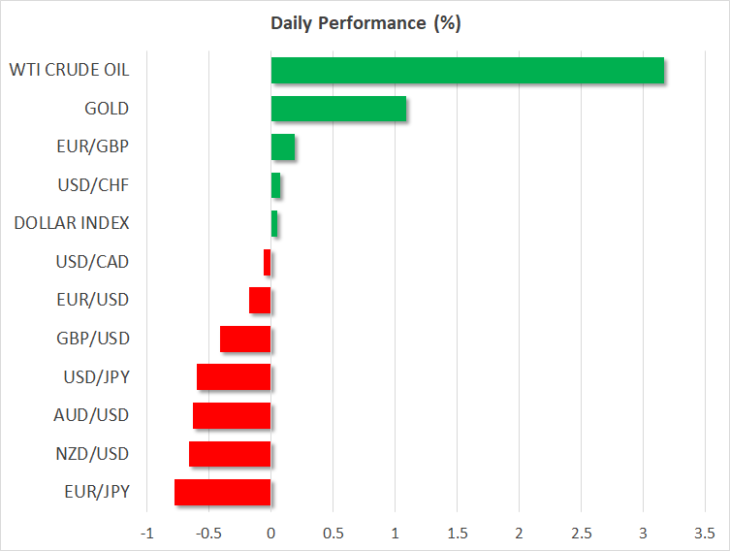 Iran’s Supreme leader Ayatollah Ali Khamenei warned the US of “harsh retaliation” for the killing of General Soleimani, who was considered to be the mastermind behind Iran’s expanding influence in the region as well as for the recent attacks on the US embassy in Baghdad.

Oil prices surged more than 3% after the attacks as investors feared Iran could respond by launching attacks on oil installations in the region similar to the one that struck Saudi Arabia in September as well as block oil tankers from passing through the Strait of Hormuz in the Gulf.

Oil prices have been rallying sharply since October as a combination of the improving outlook for global growth and tighter supply restrictions have boosted the commodity. But a major escalation in the Middle East that severely disrupts oil supply would risk damaging a fragile global economy that has only just started to recover from the long-running trade war between the US and China.

The market mood quickly turned sour as news of the US killing of Iran’s top military man emerged. Stocks in Asia retreated from earlier gains, with China’s CSI 300 index halting its attempt to surpass yesterday’s 2-year high and ending the day 0.2% lower. Equity futures for Europe and the US were also in the red, with the S&P 500 e-mini futures pointing to losses of about 1% at the open.

After a spectacular rally in the fourth quarter where all three major indices on Wall Street regularly recorded fresh record highs, a major crisis in the Middle East could be the trigger that causes a large correction.

However, the relatively contained market reaction today suggests investors are waiting to see how Iran will retaliate and the extent to which tensions will escalate in the coming days or weeks before redirecting their funds into safe assets in significant numbers.

For now, the intensifying geopolitical tensions were enough to drive gold to a 4-month top of $1544.88 an ounce. The precious metal is up almost 7% from the trough of $1445 hit in November as, despite easing trade frictions, demand has held up. Seasonal factors and ongoing uncertainties related to Brexit and the trade war, which have not been completely resolved, have supported gold, while a broadly softer US dollar has been positive for prices too.

Other safe havens also benefited from the increased risk aversion with US and German government bond yields tumbling, while the yen and the Swiss franc advanced against most of their major peers.

The dollar fell below the key 108 level versus the yen, though against a basket of currencies, the dollar index was flat as both the euro and the pound lost ground versus their US counterpart.

The Australian and New Zealand dollars were the biggest losers from the deteriorating market sentiment, falling around 0.6% each against the greenback.

Assuming there’s no further escalation in the Middle East, the focus later in the day will turn to the ISM manufacturing PMI out of the US as well as on the Federal Reserve. The minutes of the Fed’s December meeting are due at 19:00 GMT and Fed speakers will also be making their first remarks of 2020. 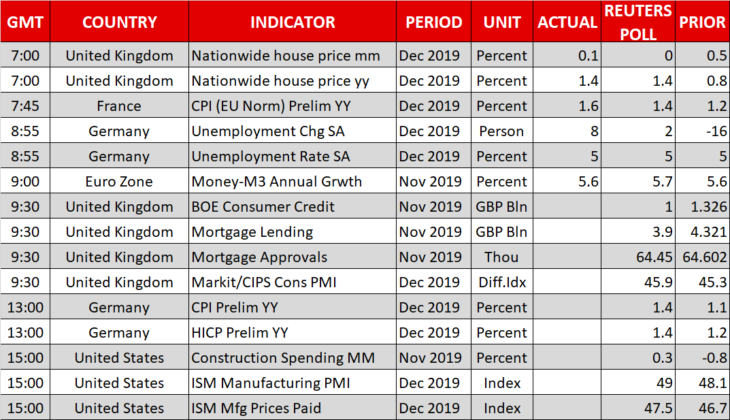 Oil Under the Gun Again. On Monday morning, a barrel of Brent is
Euro Completely Recovered Its February Losses. On Monday, March 2nd, the major currency pair
How long to the parity for EURUSD?. EURUSD price is continuing to decrease. The last
Correctional Rebound in Oil Died DownGPBUSD: chance of a drop is still thereGold Stopped GrowingBrent oil price to drop down to $50Pound Handled the Brexit with DignityUSDCAD rises to 7-week high above 1.3200
Quotes / Mon 19 / April / 02:39am

Bitcoin and Gold Prices Diverge Again, Extending 5-Month Correlation. Bitcoin is again feeling the pull of gravity
Markets roll back after last week decline, EURUSD tests the important resistance. Market focus Holidays in the U. S. and
What is crypto-currency in simple words?.   Crypto-currency is electronic virtual or digital money.
How to make money OUT of crypto-currency?How to earn bitcoin?What is bitcoin in simple words?How to buy a bitcoin?
Economic calendar / Monday 19 / April / 05:39am