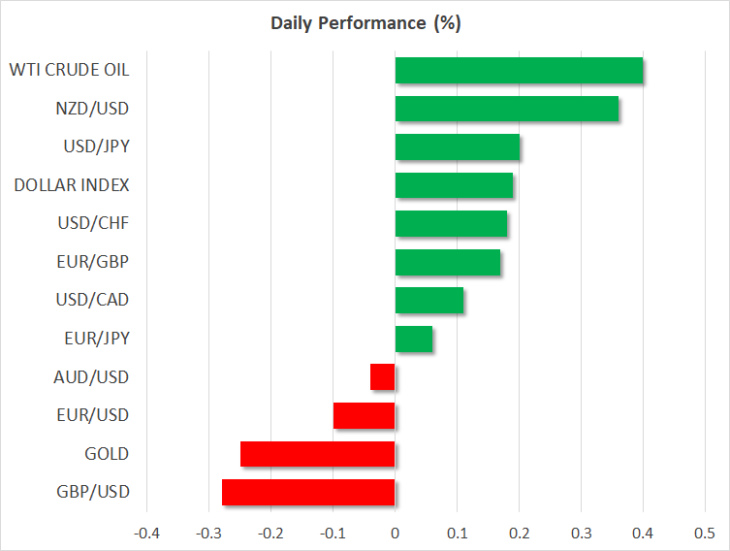 All eyes on Jackson Hole

Traders’ focus will centre on Fed Chairman Jerome Powell today when he makes his key address at the Jackson Hole Economic Symposium at 14:00 GMT. Speculation as to how dovish Powell’s speech will be have intensified following some hawkish remarks from other Fed officials.

Although Harker and Kaplan are not voting members this year, their diverging views highlight strong divisions within the Federal Open Market Committee on the course of monetary policy in the United States, making Powell’s comments ever more important today. Markets have fully priced in a 25-basis point cut at the September meeting and any indication that this is not a done deal could throw markets off guard.

However, given Present Trump’s relentless criticism of the Fed, it will be difficult for Powell to signal anything other than more easing so traders will be focusing on whether there’s been any change to the central bank’s view that the current round of rate cuts is merely a mid-cycle adjustment.

US Treasury yields extended their rebound from the lows of last week, though that didn’t stop the 10- and two-year yields from inverting briefly yesterday. Recession risks have heightened again on disappointment that tax cuts in the US are not imminent and on doubts about the pace of easing by the Federal Reserve. Moreover, flash manufacturing PMIs out of the Eurozone yesterday came in better than expected but showed the sector was still contracting, while the US manufacturing PMI dipped below 50 for the first time since 2009.

Nevertheless, there was little demand for safe havens and the yen was broadly weaker on Friday and gold was headed for a third straight day of losses, falling to around $1495 an ounce. The precious metal was also pressured by a firmer dollar, which is on track for modest weekly gains of 0.2% against a basket of currencies. Against the yen, the greenback was slightly up at 106.65.

Concerns about the growth outlook were more evident in the Chinese yuan, which skidded to another decade-low, hitting 7.0983 per dollar in onshore trading. The China-sensitive Australian dollar was flirting with key support around $0.6740 but the New Zealand dollar was one of the day’s best performer, rising to $0.6395 after RBNZ Governor Adrian Orr hinted that he was happy with where rates are at the moment.

Pound jumps on renewed optimism of a Brexit deal

The British pound rallied to a 3½-week high of $1.2271 yesterday after UK prime minister, Boris Johnson, managed to secure a negotiating window with the European Union to come up with alternatives to the backstop. The German and French leaders agreed to give Johnson a loose 30-day timeframe to put forward alternative plans on how a hard border between Ireland and Northern Ireland can be avoided once Britain leaves the single market.

However, although the French president, Emmanuel Macron, showed some flexibility on the issue of the backstop, he indicated a wider renegotiation of the Withdrawal Agreement would not be possible.

Still, this was the first positive development on Brexit since Johnson took over as prime minister in June and while many traders remain dubious about the likelihood of the UK government being able to come up with a viable solution to the Irish border issue, it leaves the door wide open for a possible deal before October 31.

Oil Under the Gun Again. On Monday morning, a barrel of Brent is
Euro Completely Recovered Its February Losses. On Monday, March 2nd, the major currency pair
How long to the parity for EURUSD?. EURUSD price is continuing to decrease. The last
Correctional Rebound in Oil Died DownGPBUSD: chance of a drop is still thereGold Stopped GrowingBrent oil price to drop down to $50Pound Handled the Brexit with DignityUSDCAD rises to 7-week high above 1.3200
Quotes / Mon 12 / April / 06:36pm

Bitcoin and Gold Prices Diverge Again, Extending 5-Month Correlation. Bitcoin is again feeling the pull of gravity
Markets roll back after last week decline, EURUSD tests the important resistance. Market focus Holidays in the U. S. and
What is crypto-currency in simple words?.   Crypto-currency is electronic virtual or digital money.
How to make money OUT of crypto-currency?How to earn bitcoin?What is bitcoin in simple words?How to buy a bitcoin?
Economic calendar / Monday 12 / April / 09:36pm