USDJPY could not reach the 110.00 level last week as the resistance trendline drawn from the October’s peaks blocked the bulls once again and pressed the price back down to the 50% Fibonacci of 108.40 of the upleg from 112.39 to 104.44. 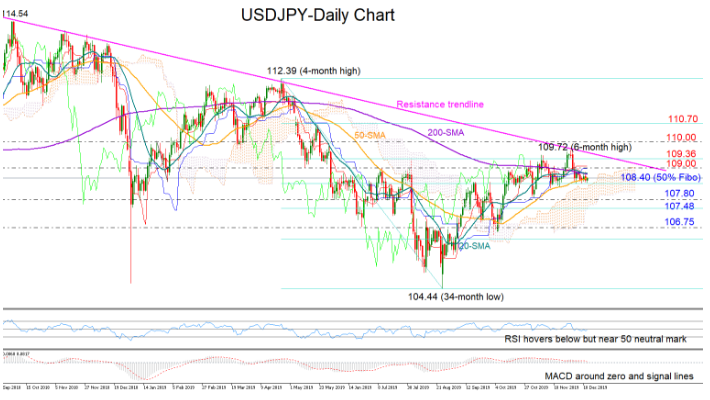 Technically, the pair may lack momentum in the short-term as long as the RSI and the MACD move around their neutral levels and the Ichimoku indicators ( Kijun-sen and Tenkan-sen) keep flattening.

Nevertheless, a closing price below the 50% Fibonacci of 108.40 may increase selling interest probably until the 107.80-107.48 area, where any break lower could next meet support around the 106.75 barrier.

Alternatively, should the bulls return above 109.00, the focus will shift back to the resistance trendline which is currently placed near the 61.8% Fibonacci of 109.36. Running above that block and surpassing the previous 6-month high of 109.72, the door would open for the 110.00 level and then for the 110.70 number.

Meanwhile in the medium-term picture, the pair is trading in an uptrend, printing higher highs and higher lows since the end of August. Traders will be eagerly waiting to see whether the 50-day simple moving average (SMA) can strengthen trend signals by crossing above the 200-day SMA.

In brief, USDJPY may follow a neutral path in the short-term, with the 108.40 and 109.00 levels coming under the spotlight. In the medium term, the positive outlook may turn brighter if the 50- and the 200-day SMAs manage to post a bullish cross.

Oil Under the Gun Again. On Monday morning, a barrel of Brent is
Euro Completely Recovered Its February Losses. On Monday, March 2nd, the major currency pair
How long to the parity for EURUSD?. EURUSD price is continuing to decrease. The last
Correctional Rebound in Oil Died DownGPBUSD: chance of a drop is still thereGold Stopped GrowingBrent oil price to drop down to $50Pound Handled the Brexit with DignityUSDCAD rises to 7-week high above 1.3200
Quotes / Sun 18 / April / 06:46pm

Bitcoin and Gold Prices Diverge Again, Extending 5-Month Correlation. Bitcoin is again feeling the pull of gravity
Markets roll back after last week decline, EURUSD tests the important resistance. Market focus Holidays in the U. S. and
What is crypto-currency in simple words?.   Crypto-currency is electronic virtual or digital money.
How to make money OUT of crypto-currency?How to earn bitcoin?What is bitcoin in simple words?How to buy a bitcoin?
Economic calendar / Sunday 18 / April / 09:46pm