WTI oil futures appears to be sustaining its very short-term bearish picture despite the oscillators currently reflecting an improvement in positive momentum. Further aiding the move south are the downward sloping 20-, 50- and 100-period simple moving averages (SMAs) and their bearish crossovers of the 200-period SMA. 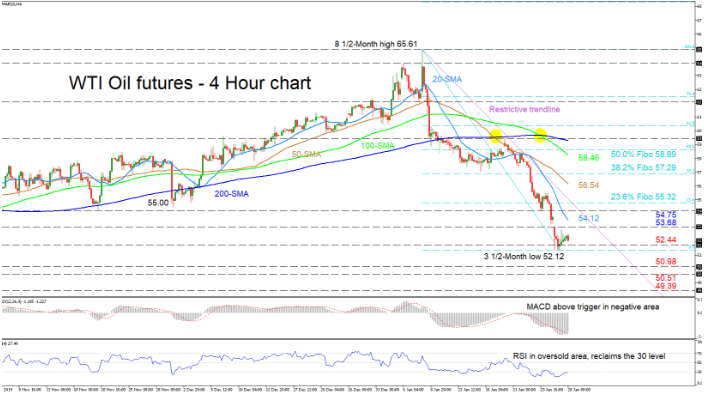 The MACD, deep in the negative zone has climbed above its red trigger line, while the RSI, currently in the oversold territory, is flirting with the 30 level. Noteworthy though, is the restrictive trendline and the location of the RSI and the MACD, which signal that a revival of the decline could unfold if seller’s pickup.

Overall, the very short-term bias is bearish and a dive below the 50.51 low could see a sell-off unfold in oil futures.

Bitcoin is the lame duck of the crypto market. Bitcoin was down 0.8% on Tuesday, ending the
Bitcoin loses strength due to the stock sell-off. Bitcoin was down 7.4% on Monday, ending at
Bitcoin and Gold Prices Diverge Again, Extending 5-Month Correlation. Bitcoin is again feeling the pull of gravity
Markets roll back after last week decline, EURUSD tests the important resistanceWhat is crypto-currency in simple words?How to make money OUT of crypto-currency?How to earn bitcoin?What is bitcoin in simple words?How to buy a bitcoin?
Economic calendar / Tuesday 29 / November / 06:54am