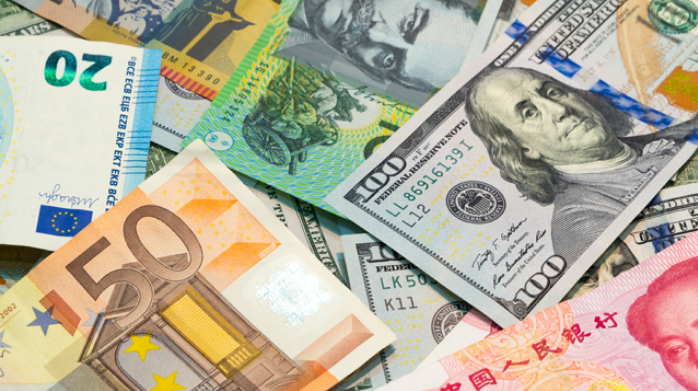 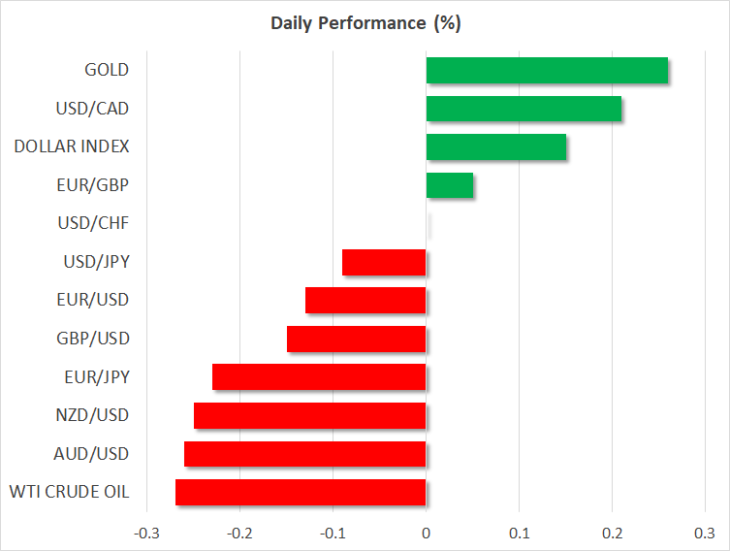 Risk sentiment soured slightly on Wednesday as investors grew wary about the possibility of the United States and China striking a partial trade deal in the coming weeks. The renewed caution comes amid growing tensions between the two superpowers over the months-long protests in Hong Kong.

The US Senate passed two bills on Tuesday aimed at putting pressure on China to respect human rights in Hong Kong as the demonstrators no show signs of backing away. The legislation has yet to be approved by the House of Representatives but has already drawn a sharp rebuke by China, accusing the US of interfering in its internal affairs.

The worsening crisis in Hong Kong poses a threat to the fragile truce in the long-running trade dispute between the US and China and comes just as the two sides are edging closer to completing a ‘phase one’ trade deal. Investors are anxiously waiting to see if the White House will agree to roll back some of the existing tariffs on Chinese goods as part of any interim agreement, which would result in a much broader deal than initially envisaged by the two parties and pave the way for ‘phase two’.

However, despite some promising signs, President Trump will likely demand more in return from China before agreeing to any roll back and again threatened on Tuesday to raise tariffs “even higher” if no deal is reached.

The cautious market mood lifted the safe-haven yen and Swiss franc on Wednesday, while gold also headed higher. The US dollar slid to a near one-week low of 108.34 yen before firming slightly, while the euro erased most of yesterday’s gains against the franc to fall to 1.0958. The precious metal extended its rebound from last week’s 3-month trough to climb to a two-week high of $1,478.80/ounce.

The risk-sensitive Australian and New Zealand dollars were the worst performers among major currencies, dropping by around 0.3% each versus their US counterpart.

Stocks were also on the backfoot globally. All three main indices on Wall Street came off earlier record territory overnight to close lower on the day and Asian stocks followed the southward trend on Wednesday. Equity futures for US and European shares were in the red too, suggesting the risk-off tone will likely carry through to the rest of the day.

There was some support for the markets, however, after the People’s Bank of China cut its one- and five-year Loan Prime Rate by 5 basis points on Wednesday. The move reinforced the view that China’s central bank will continue to act to stimulate lending and growth in the economy as the trade war drags on.

The pound also lost ground today as, although Prime Minister Boris Johnson was the overall winner of last night’s televised debate between the Conservative and Labour party leaders, Jeremy Corbyn gave a stronger performance than many had expected, raising doubts about whether Johnson will be able to maintain his strong lead in the polls until voting day on December 12.

The focus for the euro this week is the European Central Bank’s meeting minutes due on Thursday and a speech by President Lagarde on Friday, which could provide clues on the prospect of more policy easing in the euro area.

In the meantime, all eyes will be on the minutes of the Federal Reserve’s latest policy meeting, due later today. The Fed lowered interest rates at its last meeting but signalled it will hold off making additional cuts for now and so the minutes may reveal more on which way the majority of policymakers are leaning towards should global economic conditions come under further strain.

Oil Under the Gun Again. On Monday morning, a barrel of Brent is
Euro Completely Recovered Its February Losses. On Monday, March 2nd, the major currency pair
How long to the parity for EURUSD?. EURUSD price is continuing to decrease. The last
Correctional Rebound in Oil Died DownGPBUSD: chance of a drop is still thereGold Stopped GrowingBrent oil price to drop down to $50Pound Handled the Brexit with DignityUSDCAD rises to 7-week high above 1.3200
Quotes / Sun 18 / April / 05:05pm

Bitcoin and Gold Prices Diverge Again, Extending 5-Month Correlation. Bitcoin is again feeling the pull of gravity
Markets roll back after last week decline, EURUSD tests the important resistance. Market focus Holidays in the U. S. and
What is crypto-currency in simple words?.   Crypto-currency is electronic virtual or digital money.
How to make money OUT of crypto-currency?How to earn bitcoin?What is bitcoin in simple words?How to buy a bitcoin?
Economic calendar / Sunday 18 / April / 08:05pm